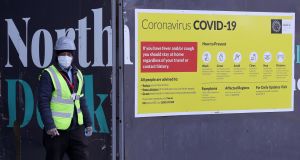 Health and safety guidelines relating to the Covid-19 pandemic at the entrance to a construction site in Dublin. Photograph: Brian Lawless/PA Wire

While everything depends on the extent to which the public policy measures currently in place continue to suppress the spread of coronavirus, the Government is considering accelerating aspects of its five-phase plan for re-opening Ireland.

As matters stand, the five phases of the reopening plan run through to August 10th. Phase one started on May 18th and the dates for phases two, three and four are June 8th, June 29th and July 20th respectively, with the final phase due to start on August 10th.

Hairdressing salons and barber shops, which were cited as reopening from July 20th, are more recently being pushed as suitable for earlier opening.

There is also pressure to bring forward the arrangements for the provision of childcare. The five-phase plan envisaged crèches and childcare facilities opening for essential workers in phase three (June 29th) and more widely on July 20th (phase four).

But Taoiseach Leo Varadkar has spoken of trying to get the childcare sector opened generally by the end of June.

On May 23rd he said the public health advice was still that people who don’t live together should keep a distance from each other of two metres, but the Chief Medical Officer Dr Tony Holohan has said it is a policy that is being kept under review.

Phase two, which begins on June 8th, would see the distance people are allowed travel from their homes increase from 5km to 20km.

On that date it is also planned that the restrictions on social gatherings would ease, so that groups of up to four people could visit other homes, as long as they observe social distancing.

It is also planned that small numbers of people should be allowed visit the homes of those over 70, or medically vulnerable, wearing gloves and “face coverings”.

Funerals will still be restricted to immediate family and close friends, but can have a slightly larger number of mourners present.

A “risk-based approach” to the re-opening of businesses and shops is to continue, with those workers who can work remotely continuing to do so, while those who can return to work while maintaining social distancing, being allowed do so.

Public libraries are scheduled to reopen and sports teams will be able to hold training sessions, but not matches, as long as there is no contact and social distancing can be maintained.

Phase three is scheduled to begin on June 29th and will see no change in the 20km rule.

At this stage the phased reopening of crèches, childminders and pre-schools for children of essential workers is to begin, with social distancing and other requirements to be implemented.

The guidance for businesses and other organisations is to ease further, so that activities that involve low levels of interaction with people can open, as long as social distancing can be maintained. All those who can work remotely are still being expected to do so.

Non-essential retailers with street-level entrances and exits are to re-open, with restrictions to be imposed on the number of staff and customers per square metre to be observed.

Cafés and restaurants are to be allowed open for business on the premises, where they can operate in compliance with the social distancing rules, and operate strict cleaning regimes.

An interesting aspect of this is whether pubs that serve food will be allowed open at this stage, or will have to wait until August 10th (phase five), as is the current plan. Publicans are lobbying and it has been reported that more than 40 per cent are hoping to re-open as restaurants during phase two.

Phase four, which is to begin on July 20th, will allow people “travel to outside your region”.

This should open up the possibility to, for instance, go for a walk in the Wicklow Mountains if you live in Dublin, or travel to the seaside if you live in the midlands. It will also allow for people to take holidays.

Hotels, hostels, caravan parks, etc are to be allowed open on a limited occupancy basis. Hotel bars are to remain closed.

This phase will also allow the reopening of places of worship for gatherings, as long as social distancing can be maintained.

It will also see the reopening of cultural outlets such as museums and galleries, where people are non-stationary, social distancing can be maintained, and there is “strict hand hygiene on entry.”

Childcare services generally will reopen generally, on a phased basis, (ie starting at one day per week).

Greater onsite working for those organisations not able to operate remotely is to be allowed, with the use of shift patterns and other measures to be used to reduce interactions as much as possible.

Restrictions on higher-risk services, such as hairdressers, are to be eased, especially for those contact services for which there is widespread demand.

Phase five, to begin on August 10th, will see people being allowed travel as tourists to our offshore islands. Larger social gatherings will be allowed, but there will still be restrictions.

There is to be a return of “normal” visiting to hospitals, residential homes, and prisons, and higher risk organisations, that are not suited to maintaining social distancing, can introduce plans for the full return to onsite work.

Shopping centres will be allowed reopen, as long as they can implement special public health measures, and likewise cinemas and theatres. Sports such as boxing and rugby can resume and gyms can open where special hygiene measures and social distancing can be observed.

Mass spectatorship sports events and festivals and other cultural gatherings are to be allowed, but only if social distancing can be maintained.

As to foreign travel, that looks like it will be returning very slowly indeed. The Government is advising against non-essential foreign travel. The Government wants all people, including Irish citizens, arriving at our ports and airports to self-isolate for 14 days (unless they are travelling on to Northern Ireland).

The UK is not making people arriving in England from Ireland, subject to its self-isolation rule.

While some European countries are looking at allowing travel between countries where the level of infection is believed to be low, as matters stand anyone leaving the Republic to travel abroad, is being asked to self-isolate for 14 days upon their return.

1 Cluster of Covid-19 infections at Kerry ‘house party’ investigated
2 Coronavirus: Two more deaths confirmed amid concern over new clusters
3 Brightest comet of the century visible in Irish skies for the next week
4 Johnny Depp: Ex-wife or friend defecated in bed in ‘fitting end’ to marriage, court hears
5 Reopening of pubs that do not serve food may be delayed beyond July 20th
Real news has value SUBSCRIBE