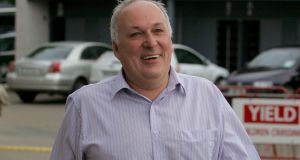 Labour councillor Dermot Lacey said it was ‘grossly unfair’ that tenants were being faced with rent increases when others were not paying what was owed. File photograph: David Sleator

The first tenant to be evicted by Dublin City Council for not paying rent is due to lose their home this month, as rent arrears hit almost €33 million across the council’s properties.

More than half the council’s 24,400 tenants are behind on their rent, with 20 per cent more than six months in arrears.

The council is owed more than €32.8 million by tenants, the largest sum ever owed to any local authority in unpaid rents, and an increase of more than €10 million over the last decade with €19.5 million owed in 2009.

However, until recently the council was unable to evict tenants who refused to pay. “Due to the absence of relevant court rules no applications for repossession could be made until June 2017,” the council said.

The council has so far secured four possession orders from the courts. In two of these cases, the tenants paid the full amount of arrears directly; in a third the tenant is now repaying the amount weekly, but in the fourth case the tenant will not pay.

“One possession order is now with the evictions office for implementation this month. It is always a last resort to evict and every opportunity is given to avoid such a scenario. However, the level of non-payment in some cases will leave no other alternative,” the council said.

Council tenants are facing rental increases of an average of €160 annually next year. Fine Gael councillor Danny Byrne, however, said these rent increases would not be needed if the council collected the rent it was already owed.

“The rent arrears figure of almost €33 million is staggering. All the increases proposed in the budget – toll charges on hard-pressed motorists, parking charges, rent increases – none of these would be necessary if the council were competent in collecting rents as they fall due,” he said. “It is completely unfair to charge extra rent to people who are paying whilst others do not pay.”

Labour councillor Dermot Lacey said it was “grossly unfair” that tenants were being faced with rent increases when others were not paying what was owed.

“It is absolutely grossly unfair to the decent rent payers,” he said, adding that the notion that the council was a “soft touch” had to be stopped.

“That is what happened with waste charges – people thought they could get away with not paying the council and the bin service ended up being privatised.”

Councillors will on Monday night also be asked to approve a budget that includes a 36 per cent increase in the East Link toll, and an increase in business rates of 1.5 per cent.

The council expects additional insurance costs of €11.6 million, and a loss of €8.4 million in rates income on about 25 Irish Water-owned properties next year.

Deirdre Heney, group leader of Fianna Fáil, the largest party on the council, said it was unlikely the budget would be approved by councillors.

“I can’t see us agreeing this budget tomorrow night. Absolutely no way.”

If councillors fail to agree a budget by the end of this month, the council can be dissolved by the Minister for Housing.

Ms Heney said the Government needed to restore the €8.4 million in lost rates linked to the Irish Water-owned properties.