Over 70s are still not being consulted on Covid-19, groups say 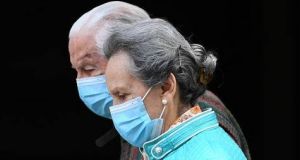 Advocacy groups have responded to the new measures for the over 70s. Photograph: Getty

The limited nature of new restrictions for older people have been welcomed by advocacy groups, although the organisations criticise what they say is a continued lack of consultation with the over 70s on the Covid-19 crisis.

Allaying concerns that vulnerable groups would be urged to cocoon again amid a rise in coronavirus case numbers, Taoiseach Micheál Martin said on Tuesday that older people would instead be asked to “exercise their individual judgment to limit their interactions to a small network for short periods, to avoid public transport where possible and to shop during designated hours”.

Mr Martin made the comments while announcing the tightening of some key restrictions up until September 13th in response to the spike in Covid-19 cases here.

“What’s missing, however, is any strategy as to how older and vulnerable people are going to live with Covid on an ongoing basis.”

He said there were 430,000 people in the State over the age of 70, who have a myriad of health, well-being and household circumstances.

“One blanket strategy covering all older people is not good enough anymore. Older people, just like trade unions and teachers, are stakeholders in this crisis and yet they have not been engaged with in any meaningful way so far.”

He said he hoped that at the end of the three-week period of the new measures, a “more nuanced and targeted” approach would be taken to the over 70s, reflecting their widely varying situations.

Maureen Kavanagh, chief executive of Active Retirement Ireland, said it was “unfair” to urge older people to reduce their social interactions over the next three weeks.

“Since the outbreak of Covid-19 our older people cocooned and diligently followed all of the Government advice. Our older people sacrificed seeing their families, they adapted to using new technologies, they followed the guidelines and remained indoors for the duration of lockdown.

“Asking them to stay indoors again and to reduce their social interaction is unfair after they have already sacrificed so much, and while our members will comply with this advice, they feel that they alone are being asked to bear the brunt of this.”

She said recent outbreaks of Covid-19 had not been among older people.

“We do not believe in pitting one generation against another. Everyone must act together if we are to come through this. While we, as much as anyone, understand the need to protect our older citizens, we believe the distinct causes of the recent surge in cases must be dealt with, rather than reimposing restrictions on some of the most vulnerable in our society.”