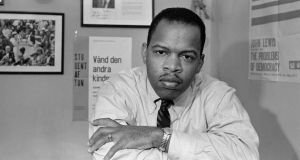 John Lewis, the American politician and civil-rights leader died recently. In 1963 he joined Martin Luther King and others on the March on Washington, to protest against racial segregation in the US. Photograph: Sam Falk/The New York Times

In tomorrow’s reading from Genesis we have a story about family life, of sadness and intrigue; a father and a favourite son called Joseph and his jealous siblings who sell him into captivity in Egypt – one of the great stories of the Hebrew bible but taken on its own it has limited value. Context explains.

Some years after the Joseph event his family/tribe were in trouble. They were a nomadic people and when famine struck they headed for Egypt, a major power with food reserves they were willing to share. They settled and prospered but in time were seen as a threat by the Egyptians. This led to their enslavement and eventually the Exodus which has inspired freedom movements ever since.

Leaving questions of historicity aside, these ancient texts show that thousands of years ago people were dealing with issues that trouble us to this day – immigration, racism and slavery. The moral perspective is highlighted by the presence of the God, who is active on the side of justice and freedom. “Let my people go” – the divine command that has echoed through time and around the world and especially in America in recent times.

John Lewis, the American politician and civil-rights leader died recently. In 1963 he joined Martin Luther King and others on the March on Washington, to protest against racial segregation in the US.

In 1965, while leading a peaceful march across Alabama’s Edmund Pettus Bridge, Lewis was brutally beaten by police. At his funeral, former US president Bill Clinton described how he carried a backpack on that march: “John put an apple, an orange, a toothbrush, toothpaste to take care of his body ’cause he figured he would get arrested. And two books . . . one, the autobiography of Thomas Merton, a Roman Catholic Trappist monk . . . I think he figured that if Thomas Merton could find his way and keep his faith and believe in the future, he, John Lewis could too.”

Fr Merton connected to Lewis because he exposed the negative thinking of the opposition. In Disputed Questions he explained: “Its solutions are simple and easy. It makes its decisions by a simple glance at a face, a coloured skin, a uniform. It identifies the enemy by an accent, an unfamiliar turn of speech, an appeal to concepts that are difficult to understand . . . This is not ‘ours’. This must be brought into line – or destroyed. Here is the great temptation of the modern age, this universal infection of fanaticism, this plague of intolerance, prejudice and hate flows from the crippled nature of man who is afraid of love and does not dare to be a person. It is against this temptation most of all that the Christian must labour with inexhaustible patience and love, in silence, perhaps in repeated failure, seeking tirelessly to restore, wherever he can, and first of all in himself, the capacity of love and understanding which makes man the living image of God.”

That mindset is evident in today’s so-called populist movements in Europe and America including those opposed to the Black Lives Matter movement often claiming to act in defence of Christian values.

Fr Merton insists it is the duty of Christians to confront hatred and intolerance wherever it exists – not always easy as we know from the difficulties we have relating to the Travelling community, immigrants and other labelled groups.

The Gospel reading (Matthew 14: 24-33) has a message for churches preoccupied with inhouse matters. The disciples are in a boat caught up in a severe storm. They panic when they see Jesus in the distance “walking on the lake”. Peter tries to join him but discovers he cannot make it by himself. The disciples feel safe only when Jesus comes on board and takes control.

The Methodist Theologian Rev Dr John Vincent suggests what discipleship demands: “God in Jesus Christ enters the human battles for existence and wholeness and exerts his power to redeem men. The disciples are called to enter into this decisive issue – not merely to ‘decide’ about it but participate in it.”