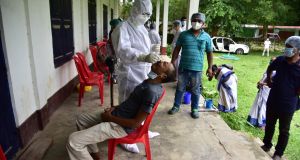 Where better to seek sanctuary from a virus roaring through a crowded metropolis than a remote mountainside with views of the Himalayas?

This was the reasoning that prompted Lalit Upreti (34) to leave the Indian capital, Delhi, where he works as a cook, two months ago to return to his hamlet Khankari in Uttarakhand, near the country’s border with Nepal. Here, he thought, his family would be safe.

On August 7th, he attended a health camp organised by the village council. “I went for the heck of it, I had no symptoms but thought why not?,” said Upreti. Apart from checking for monsoon-related ailments, local health officials took swabs for Covid-19.

To his surprise, Upreti’s name appeared on the list of four villagers who tested positive.

“Here? I couldn’t believe it. We are so cut off. We don’t even need to go shopping for vegetables because we grow our own,” he said.

With a mild fever and an upset stomach, Upreti was taken to a quarantine facility the following night.

As India’s positive cases hovers around 2.7m, there are growing fears that the virus’s impact on rural communities could be devastating.

The country – which on Tuesday said it had carried out nearly 900,000 coronavirus tests nationally in a single day – seems to be entering a dangerous new phase of rising infections in small towns and villages such as Khankari.

“Khankari is tiny. If my little outpost can get four cases, then it can sneak into every village in the country. I can’t sleep at night when I think of what might have happened if we hadn’t caught those four cases,” said Rajan Singh Negi, the village head of Khankari who organised the health camp..

Some 600 million Indians live in in rural areas, and fears are rising that they could be overwhelmed by an invisible catastrophe, where many will die without testing or treatment. Data from the National Family Health Survey-4 showed that only about 25 per cent of rural Indians have access to public outpatient (OPD) healthcare.

There are also grave concerns for about 70 per cent of India’s elderly population, who live in villages. Co-morbidities abound and are often left untreated because medical services are far away.

India’s top epidemiologist Jayaprakash Muliyil, who believes up to half of India’s population (670 million people) will get the virus, says that most people with co-morbidities in rural India fail to get treatment.

“This group, and the elderly, are more prone to getting the virus. With limited resources, their families will not rush an elderly person to hospital if they have a fever,” said Muliyil. “They will be allowed to die. That is the reality in rural India where life expectancy is 65.”

Since the deaths will be spread out across huge geographical districts, some as big as 10,000 sq km (London is 1,572 sq km), Muliyil says the real scale of the human tragedy will only emerge much later, if at all.

Anecdotal evidence also suggests that daily wage labourers will not reveal their symptoms for fear of separation from their families, the stigma, and losing their wages by being quarantined.

“People in the rural areas are hiding their symptoms and are not coming forward to get tested even when the testing van is reaching the village,” said Dr Ravindra Sharma, a senior medical officer in Lakhmipur Kheri district, in India’s most populous state, Uttar Pradesh, which neighbours Uttarakhand.

At the other end of the country concern about rural outbreaks worried many in the southern state of Kerala, where a wedding and a funeral attended by one family in one of the state’s most remote villages, Valad, led to 236 new cases.

Kerala, home to coffee and tea plantations, had previously been hailed as a “model” for getting a grip on the pandemic fairly early.

The way the pandemic will play out in rural India, says public health experts, will be very different from the cities where, though it is still raging, doctors and health officials have got the measure of the beast, to some degree at least. That’s thanks to the fact that 80 per cent of doctors and 60 per cent of hospitals are in urban areas.

This relative control will be difficult to replace in large, sprawling states like Uttar Pradesh, with 200 million people, and it’s southern neighbour, Bihar, with 104 million people. Both have extremely fragile medical services.

In Bihar, one of India’s poorest states where around a third of people live below the poverty line, 90 per cent of the population lives in villages. It has only one bed and just under four doctors per 10,000 people according to the 2019 National Health Profile. At the best of times, it struggles to deal with viral fevers or dengue outbreaks.

In Uttar Pradesh, despite there being 135 hospitals that deal with Covid cases, according to its health department, but a lack of testing is taking its toll.

Farmer Amar Jeet Singh (47), from Navgava village in Lakhmipur Kheri district, developed a liver infection and struggled to get tested. He was refused treatment at the district hospital because he did not have a Covid-negative report.

“I was taken to the primary health centre but there was no facility for testing there. I went to the community health centre and met the same fate there too. No testing, nothing,” said Singh.

Some doctors expect the next few weeks to be sombre. Dr Harjit Singh Bhatti, the former president of the AIIMS Resident Doctors’ Association, said India’s ramped up testing was only happening in urban areas. In the countryside, nothing much had changed, he said.

He blamed the neglect of decades and inadequate spending on healthcare for what he described as a likely disaster in the coming weeks and months.

On day three of his quarantine, Upreti, who is contemplating his future in his rural home village, says he has realised there is no place safe from the virus. “I hope I recover soon and go home but home won’t be the same again. The virus has destroyed the old sense of security.”

With India’s setting a record toll of daily infections last week (nearly 67,000), and a death toll approaching 52,000, his concerns may yet be proved right. – Guardian