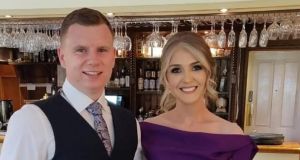 Fiona Mulligan and David Dunne had their pre-wedding menu tasting at Lough Rynn Castle in Co Leitrim last Tuesday evening – but their eyes were riveted to their phones as the dishes kept arriving to the table.

The pair, who had originally planned to celebrate their wedding at the castle on June 5th with 250 relatives and friends, were anxiously waiting for the latest Government announcement on Covid-19 restrictions.

The June plan had been abandoned as the coronavirus pandemic erupted “and it became clear we probably wouldn’t even get out of Dublin”. The couple had recently sent out 100 invitations to their rescheduled September 3rd ceremony.

It seemed that no sooner had the invitations plopped into the postbox than 85 new Covid-19 cases were confirmed in one day and it became likely that the plan to allow gatherings of up to 100 people indoors would be reconsidered.

“We are now looking at maybe having the wedding over two days,” says Mulligan, a native of Ballaghaderreen, Co Roscommon, who is hoping 50 can attend each day, and that no invitations need to be rescinded at this late stage.

Ciaran Reidy, a director of both Lough Rynn Castle and its sister hotel Kilronan Castle in Co Roscommon, spends his days trying to find solutions along with couples. He estimates that 80 per cent of the hotels’ 2020 weddings have been postponed until 2021. “We have had couples who have set a second and then a third date and still are not sure what will happen,” he says.

Both hotels host 15 or 16 weddings every August, but this month they are down to five each. The loss for the hotels is even more significant than these figures suggest, according to Reidy.

The 15 weddings pencilled in for August 2020 before the crisis hit would have been attended by about 200 guests each, but instead the hotel is catering for four or five weddings with a maximum attendance of 50. “So that’s 200 guests instead of up to 3,000 over the month,” says the hotelier, who says the “one-size-fits-all” approach is nonsensical given how much venues vary.

“The ballroom at Lough Rynn can accommodate 350. It is frustrating because even with social distancing we could cater for 100 very comfortably.”

Cork man Shane Kiely and his fiancee, Róisín O’Donoghue, say they absolutely understand the need for the authorities to protect public health but they too think more flexibility is required.

“Róisín is a theatre nurse who, more than anyone, knows the importance of keeping everyone safe,” says Kiely.

“We feel we are in limbo because our wedding is on September 11th and maybe the rules will change again on August 31st.” He feels sorry for all the businesses who are losing out, including hotels and photographers. The couple had planned to have 190 guests, but now 100 are invited to the function at The Oaks hotel in Killarney. They are reluctant to halve that in case the restrictions are eased again on August 31st.

Postponing wasn’t an option, he says, as many hotels are now booked out for 2021, and they don’t want to put their lives on hold indefinitely. O’Donoghue had her hen party on Zoom, he is not having a stag party and the honeymoon is off indefinitely.

“It crossed our minds [to postpone] but we have so many life plans, like having a family, and we can’t put everything on hold,” says Kiely.

His wedding photographer, Liam Kidney, says a lot of colleagues are struggling financially and in a dilemma because if they do get a wedding, they will lose the pandemic unemployment payment – and perhaps not work again for several months. The Irish Professional Photographers & Videographers Association has estimated that 62 per cent of their members have shut down since the pandemic started.

Co Roscommon-based photographer John Reynolds, who has seen his wedding orders slashed from 49 this year to eight – “and some of those are getting nervous” – is very philosophical about the restrictions.

“I would love to be out there shooting weddings but this is for the greater good, and for the Government to do anything else would have been absolutely reckless,” he says. Having seen countless weddings up close, he believes the inevitable partying “would not be conducive to preventing the spread of the virus”.

Vicki Lavin and Marc O’Connor, a couple from Boyle, Co Roscommon, currently have two wedding dates – in February and November next year. “We had hoped to invite around 270 people but that’s not going to happen,” says Lavin. The November booking is their plan B in case things do not return to normal by early 2021.

“Now I think it is more likely to be in November,” she says. Speculation that weddings will have to finish by 11pm in line with new rules for restaurants, and that one dance only will be permitted, have made her rethink her original plan. “It is a nightmare but it is nobody’s fault,” she says. “We have to decide in the next few weeks which date we will go for. But whatever is meant to be will be.”