One death and 190 Covid-19 cases confirmed

Minister for Health Stephen Donnelly says that Ireland is at a "tipping point" with coronavirus following the recent increase in positive cases. Video: RTÉ 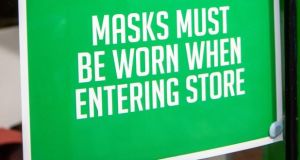 A further 190 cases of Covid-19 have been confirmed in the State, the National Public Health Emergency Team (NPHET) said on Tuesday.

One further coronavirus-related death has also been notified to the Health Protection Surveillance Centre, bringing the total number of fatalities from the virus to 1,775. The number of confirmed cases to date stands at 27,499.

Minister for Health Stephen Donnelly said: “We are at a tipping point. Ireland’s rate of growth in new cases over the last two weeks is the fourth highest in Europe. In the last two months we have gone from a low of 61 cases in one particular week to 533 cases last week.”

Fourteen of the 190 new cases have been identified as arising from community transmission, and 75 were linked to outbreaks or close contacts of confirmed cases.

Three quarters of the new cases were among people under 45 years of age. Some 111 of the confirmed cases were women, and 76 were men.

A total of 48 of the cases were in Kildare, 46 in Dublin, 38 in Tipperary, 20 in Limerick and seven in Clare. The rest of the cases were spread across Carlow, Cork, Kerry, Kilkenny, Laois, Louth, Meath, Offaly, Waterford, Wexford and Wicklow.

Officials were seeing “multiple clusters” throughout the country, Mr Donnelly said, adding these clusters were occurring in people’s homes, in multiple workplaces and in a number of other social settings.

There had been confirmed cases in every county in the country over the last 14 days, the acting chief medical officer Dr Ronan Glynn told a post-Cabinet press briefing on Tuesday.

The figures come as the Government recommended a series of measures to reduce the increasing spread of the virus, including limits on people gathering indoors to groups of six.

People over 70 are being asked to limit their social interactions, while businesses are recommended to allow employees work from home where possible until 13th September.

A member of staff has tested positive for Covid-19 in a nursing home in Mooncoin, Co Kilkenny, near the border with Co Waterford.

The nursing home, the Mooncoin Residential Care Centre has been testing regularly for Covid-19. It is understood the case was confirmed on Friday and the member of staff who tested positive is now at home self-isolating.

One patient and a member of staff at University Hospital Limerick have tested positive for coronavirus on Tuesday, a hospital spokesman has confirmed.

“A number of staff from the ward at the centre of what we believe to be a localised outbreak have been identified as contacts. They have been asked to stay off work and to self-isolate in line with national guidance,” the spokesman said.

The hospital said that it had completed “initial testing of all patient contacts” and this “has not identified further cases”.

“Initial testing of all staff contacts is expected to be complete tomorrow, Wednesday, August 19th,” the spokesman said.

UL Hospitals Group chief operations manager, Noreen Spillane said “this is unfortunate but we have every reason to believe that this is a limited outbreak that is contained in the ward in question.”

In Co Kildare, four cases of Covid-19 have been confirmed in a milk processing plant. Some 104 part and full-time staff are employed at the Glanbia Ireland plant in Ballitore. The facility remains in operation.

Glanbia Ireland said in a statement that the company “immediately activated contact tracing procedures and the company’s H&S and Quality teams have implemented all the appropriate processes” in Ballitore.

It has been operating heightened health and safety measures recently including the implementation of social distancing, temperature checks for staff upon entry, use of PPE and perspex partitions.

Glanbia Ireland said there were no other confirmed cases at any other of their locations.

Northern Ireland’s Department of Health reported one further coronavirus-related death on Tuesday, bringing the total number of fatalities recorded by the department to 559.

According to the department, the death was reported in the last 24 hours, but occurred several days previously.

A total of 41 new cases of Covid-19 were identified in the North in the last 24 hours, bringing the number of cases since the pandemic began to 6,471.

Localised restrictions to prevent the further spread of coronavirus could soon be required in certain areas in Northern Ireland, the North’s chief scientific adviser warned earlier this week.

“I think we’re getting close to the point where certainly in those areas with the highest level of cases . . . we may have to consider whether any additional local measures are required,” Prof Ian Young told BBC Radio Ulster on Monday.