Children in Dublin who use public transport should walk or cycle, education dept advises 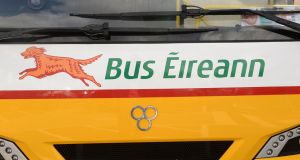 A spokeswoman for Bus Éireann said the thinking behind the new regime was that school buses were very different from public transport generally. File photograph: Dara Mac Dónaill/The Irish Times

Children who normally take public transport to school in Dublin are to be asked to prioritise healthy options like walking or cycling, according to guidance issued by the Department of Education.

Letters to parents in recent days outlined plans for school buses to come back into service without a requirement for social distancing, but with a mandatory requirement for those aged over 13 years to wear facemasks.

All staff using the post-primary school transport service will be required to wear face coverings on buses.

The new regime would also see children from the same family asked to sit together and use the same seats every school day. Where children do not have siblings on the same bus the requirement is for them to sit with a member of their school class.

Additionally, bus drivers will be required to wear face masks and hand sanitisers will be provided as well as the vehicles being subjected to additional cleaning.

A spokeswoman for Bus Éireann which operates the school transport service for the Department of Education said the thinking behind the new regime was that school buses were very different from public transport generally.

Spokeswoman Elizabeth Headon said the service was a “closed” community. “It is not like public transport where anybody can get on,” she said. Ms Headon added that as everyone on the bus would be known to each other and the driver the issue of contact tracing would be straightforward and any outbreaks could be confined to large extent.

However Dermot O’Leary of the National Bus and Railworkers Union said the situation in Dublin was quite different as the department’s school transport service did not apply in the Capital or some other large urban centres and schoolchildren in these areas were required to get public transport.

Mr O’Leary said the department had consulted with Bus Éireann and the private companies which he said operated “the vast majority” of Bus Éireann school transport services.

But he said in relation to areas where children took public transport the capacity on these services was set at 50 percent. He said the addition of thousands of schoolchildren in September would have to be carefully managed. He said the NBRU had questions for the National Transport Authority about what measures would be put in place. Mr O’Leary said he would hope the NTA “would consult directly with us” on the measures.

Mia Fanning of the National Parents Council of Post Primary Schools said most parents would have assumed that social distancing would have applied on school buses. She said parents would be monitoring the roll out of the service and the thinking behind the measures.

“What attempts were made by the department to engage with Bus Éireann, the Department of Transport and the NTA to deal with the logistical considerations by obtaining additional buses to deal with capacity constraints imposed by social distancing?” he asked.

A Department of Education spokeswoman said further information would be circulated to parents in the coming days explaining aspects of the new regime. The additional information is aimed at answering their questions.

Number on pandemic unemployment payment up by more than 10,000 in past week 20:59
Gardaí seeking to track movements of man (48) prior to unexplained death 20:50
High Court approves ECT treatment for elderly priest 20:47
UCC to hold virtual freshers’ week despite calls to cancel over Covid-19 fears 20:40
Assembly members call for equivalent of Helen’s Law in Northern Ireland 20:24