An Taoiseach Micheál Martin says that the tightening of key restrictions to help curb the spread of Covid-19 will impact upon most people in Ireland. Video: RTÉ 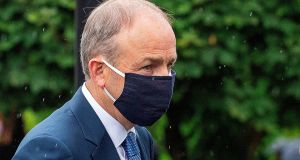 Taoiseach Micheál Martin has confirmed key restrictions are being tightened in a bid to combat coronavirus, saying “we need to accept additional controls”.

He said public transport should be avoided, where possible, while sports events and matches are reverting to ‘behind closed doors’ with no spectators allowed.

There is specific fresh advice relating to the over-70s, who are being asked to “exercise their individual judgment” on the wisdom of taking a so-called staycation, and other matters. They should limit social interactions and shop during designated hours.

Outdoor gatherings are being limited to 15 people and visits to private homes will be restricted to six people from no more than three households.

Restaurants and pubs serving food have a new closing time of 11.30pm. It was previously 11pm.

The announcement came on the day that a further 190 cases of Covid-19 were confirmed in the State, and another death from coronavirus was recorded. The total number of fatalities from the virus is 1,775, while the number of confirmed cases to date stands at 27,499.

Earlier, Cabinet members pushed back against some coronavirus-related restrictions recommended by the National Public Health Emergency Team (NPHET) amid divisions between the Taoiseach and Tánaiste.

Sources reported disagreement between Micheál Martin and Leo Varadkar at the long Cabinet meeting today, which delayed the press conference which was due to begin at 3pm.

When the press conference got underway shortly before 6pm, Mr Martin said that if the current increases in cases continue it will be “impossible” to stop the spread of the virus to vulnerable people.

And he confirmed that, until September 13th, all businesses will be asked to allow employees work from home.

Additional powers may be given to gardaí to enforce public health measures. Mr Martin said that, for example, where a pub is flagrantly flouting public health guidelines gardaí will be given the power to immediately close down the premises. He suggested legislation will be needed to do this.

However, Garda officers said they were surprised no new powers had been set out for the enforcement of restrictions.

They added they did not believe the Government had consulted with Garda Headquarters despite the Taoiseach Mr Martin and Mr Donnelly having mooted new powers for gardaí.

A number of sources said if gardaí had the power to close pubs down on the spot for breaching measures aimed at combating Covid-19 it would act as a significant deterrent. They also believed on-the-spot fines should be introduced.

“It would mean (gardaí) would have the power to enforce all kinds of Covid-19 measures. You could break up gatherings and sanction people at the same time and without having to start a criminal process,” said one source.

However, several sources said introducing new measures to break up house parties was very complex as it would involve entering a person’s home without a warrant.

Meanwhile, Mr Martin said that, six months ago, Ireland was confronted by a “rapidly moving and unprecedented threat”.

He said the harsh reality was that “recent trends and the spread of the virus are very serious”, when he spoke at Government Buildings this afternoon.

He said public health officials had said there were “multiple significant outbreaks”.

“The evidence is that a large number of people are acting as if the virus is no threat to them, or that it’s OK to take a few more risks.”

Minister for Health Stephen Donnelly said previous sacrifices “will have been for nothing” if action is not taken.

He revealed 190 new cases of Covid-19 had been reported today. He said there are now multiple clusters throughout the country, with the 14-day cumulative cases per 100,000 up to 26.

“This virus is relentless. It doesn’t slow down because we want life to return to normal.” He said dramatic surges must be avoided.

“We need to be honest with each other, we are at a tipping point. Irelands rate of growth in new cases over the last two weeks is the fourth-highest in Europe.”

Acting chief medical officer Ronan Glynn, who was also present at the press conference, said NPHET wants to limit congregation and the number of people each citizens meets.

He said there are more outbreaks in households and clusters linked to social and sporting activities.

He said 62 per cent of cases in recent days were linked to close contacts and this meant citizens needed to be “extra vigilant.” He added: “This virus is not tired even if we are.”

Mr Glynn said employers “must step up once again”. He said there must be a balance between enjoying life and acting responsibility.

He said all normal activities can only continue if everyone plays their part.

Under questioning, said he was not recommending that those over-70 visit hotels.

Mr Glynn said the key criteria for protecting the vulnerable and ensuring normal healthcare services can resume is suppressing community measures. “We are only going in one direction unless everyone acts together.”

Green Party leader Eamon Ryan said it is a “difficult political task” to make decisions when the consequences are not yet visible.

He said the Government hopes to set out a longer-term road map by the middle of next month.

Earlier, the Cabinet met for more than three hours to discuss recommendations from NPHET designed to halt the spread of Covid-19.

The advice of NPHET to Cabinet was that, unless it is absolutely essential for an employee to attend their workplace in person, all employees should work remotely.

Indoor and outdoor training should be limited to six people indoors and 15 outdoors and mixing of groups should be avoided, with exceptions for elite and professional sports and horse racing.

Sources described the Cabinet meeting as “tense” and said there was significant “pushback” against some of the more stringent measures proposed by NPHET.

There was significant pushback to NPHET proposals for citizens to completely avoid public transport, sources say.

There was also disagreement about the numbers of guests that should be permitted to attend weddings. No guidance was issued on that matter today, with Cabinet set to “review” the figures.

Restaurants and cafes should comply with mandatory wearing of face covers for staff in customer-facing roles, NPHET recommended.

Face coverings should be worn in private cars when they are being shared by members of different households.

Mr Donnelly was briefed on Monday night after a lengthy meeting of NPHET discussed the recent sharp increase in the number of cases. He brought their recommendations to the Cabinet when it met at 1pm.

The Cabinet meeting was scheduled late on Monday night – in place of a previously arranged meeting of the Cabinet sub-committee on Covid-19. Only the full Cabinet has the authority to make decisions of the Government.