Decline of more than 700 people between November and December 2019 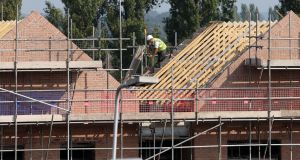 A significant factor in the reduction in homelessness has been an increased output of social housing by housing bodies like the Peter McVerry Trust, its chief executive Pat Doyle has said. File photograph: PA

Figures showing a fall in the number of homeless people to below 10,000 for the first time in almost a year have been widely welcomed.

The latest data, published on Wednesday by the Department of Housing, show there were 9,713 people in emergency accommodation during the week of December 23-29th 2019.

Homeless figures have fallen every December compared with the previous month since 2014 (when data was first gathered in its current format) as homeless people stay with families and as landlords delay evictions during the Christmas period, only to rise again in January. In January 2019 the numbers increased by 273 to 9,987.

Minister for Housing Eoghan Murphy said on Wednesday he knew the decrease was “not enough” and the numbers “in crisis [was]unacceptably high, but the change in 2019 is a move in the right direction”.

Since July last year, he said, the number of families presenting as homeless in Dublin had been falling each month.

The Peter McVerry Trust welcomed “one of the largest recorded monthly decreases” in the figures. Chief executive Pat Doyle said a significant factor had been an increased output of social housing by housing bodies like the Trust.

“Irish Council for Social Housing members played a key role in helping to secure housing solutions in 2019 with a 44 per cent increase in the number of households housed by housing associations last year.

“The challenge now is to keep housing delivery up all year round and to ensure that we continue to provide housing solutions, particularly for single people.”