‘We cannot continue with business as usual’, coalition of advocacy groups says 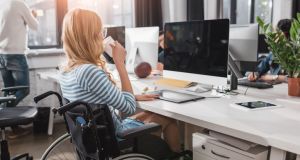 While 71 per cent of the general working-age population are at work this figures is just 31 per cent of people with a disability. Photograph: iStock

Poverty is the biggest issue for people with disabilities, a coalition of advocacy groups has said.

Publishing its election manifesto on Thursday, the Oireachtas Disability Group (ODG) said poverty among people with disabilities had more than doubled in the last decade to 24 per cent and the poverty crisis was “deepening”.

“A broad consensus is forming that we cannot continue with business as usual for the 643,000 people with disabilities who have seen no improvement since the dark days of the recession,” the group said.

The group comprises Oireachtas members as well as the Disability Federation of Ireland, Inclusion Ireland, the Independent Living Movement of Ireland and the National Federation of Voluntary Service Providers.

The group is demanding that the Comprehensive Employment Strategy for Persons with Disabilities, published by the government in 2015, be fully implemented and that the 2004 EPSEN Act (Education for Persons with Special Educational Needs) be fully commenced.

The group is inviting spokespeople from all the political parties to a hustings at the Mansion House in Dublin on Friday 31st “to outline their vision to lead us out of crisis”.

Coalition members will hold regional hustings outside Dublin on the same day.

Among other demands are for a properly funded housing adaptation grants scheme; more community support packages and an acceleration of the decongregation process of moving people out of institutional ‘home’ settings.

Legislation guaranteeing a right to the personal assistant to all people who need one and a transport support scheme are also needed, they say.