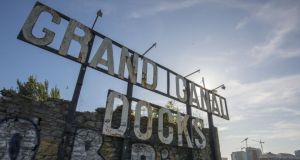 Average salaries among tenants in Dublin’s “Silicon Docks” rose to €127,618 in 2019 and high rents in the area reflected competition for housing among well-paid finance and technology professionals, a new survey has found.

The data was gathered by Owen Reilly estate agents, based on 231 lettings completed during the year in the docklands area.

It shows that in certain pockets of the docklands, such as Grand Canal Dock, near Facebook and Google’s headquarters, average salaries were €147,582.

Some 55 per cent of tenants renting from the company were working in tech, with average rent across the area coming in at €2,479 per month – 20 per cent higher than the Dublin average. For a three-bedroom apartment, this rose to €2,939.

Rents increased by 5.3 per cent on average year on year, while one bedroom units were up by almost 7 per cent.

This compares to a much larger proportion of Irish purchasers – some 62 per cent. However, this has decreased by 11 percentage points compared to 2018, as buying up property in the area is becoming increasingly popular among overseas investors. Asian investors now account for 14 per cent of 112 apartments the estate agent sold in 2019, compared to 5 per cent in 2018. There was also a significant increase in European purchasers, who accounted for 16 per cent of sales compared to 7 per cent.

For properties worth less than €400,000, first-time buyers are now consistently outbidding investors and account for over 60 per cent of purchasers in that range, according to Mr Reilly.

“They are motivated to buy as paying a mortgage is now much cheaper than paying the average rent in the docklands,” he said.

The workforce in the docklands currently numbers 40,000 and this is expected to double in the next two years. Owner occupiers accounted for 53 per cent of purchasers, increasing from 47 per cent in 2018, while the proportion of cash buyers collapsed from 75 per cent to 55 per cent in the same period.

The rapidly growing rents and incomes in the docklands have given rise to concerns among experts about growing disparities within Dublin.

Philip Lawton, assistant professor in geography in Trinity College Dublin, said there are implications for wider population groups accessing housing in the docklands. He said new developments are largely devoid of housing for community groups, “which is a serious backwards step”.

“The docklands is headed towards being an exclusive space only catering for those on high incomes. This is a step beyond boom time stuff, which is a worry.”

Orla Hegarty of the UCD school of architecture said there was a risk that established city communities could be displaced to the commuter belt while key workers who run the city and those on average wages couldn’t compete for high rental properties.

Mel Reynolds, an architect and housing policy commentator said new supply was aimed at tech workers, not indigenous buyers or locals, giving rise to the same gentrification effects seen in tech hubs such as San Francisco.