Woman who gave birth on Dublin street remains in hospital 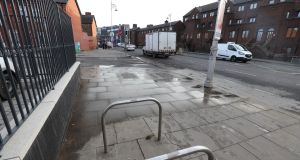 The junction of Linenhall Street and North King Street in central Dublin, where a woman gave birth in the early hours of Monday. Photograph: Collins

A vulnerable woman who gave birth on a Dublin street in the early hours of Monday morning, remained in hospital last night.

The woman, who is of no fixed address but is believed to be a Dubliner, went into labour just after 1am around the junction of Linenhall Street and North King Street in what were below-zero temperatures at the time.

She delivered the baby by the roadside in the north inner city as a number of passersby and local people went to her aid on hearing her screams.

After giving birth the woman then walked southwards towards the quays and was eventually found with her baby by the emergency services at the Four Courts on Inns Quay.

People who were at the scene when she gave birth were said to be shocked when the woman then decided to walk on. They followed her and guided the emergency services so they could find her, about 1km from where she had given birth.

Gardaí sealed off a number of scenes for examination, including the location where the woman gave birth and where she was found outside the Four Courts.

However, it is understood that while those scenes were sealed off so they could be examined, it was a precautionary measure and there is no criminal component to the case.

“Gardaí and emergency services attended the incident on North King Street at approximately 1.30am, Monday, January 27th,” the Garda said in reply to queries.

“Due to the sensitive nature of this incident we will not be providing any further information.”

Despite the circumstances of the delivery and the fact the woman was described as very vulnerable, mother and baby were in a stable condition in the Rotunda Hospital in the north inner city last night.

Garda sources described her as having no fixed address, although it remained unclear if she was a rough sleeper.

A number of sources in outreach services said the woman was not known to them and they believed she would be had she been sleeping on the streets.