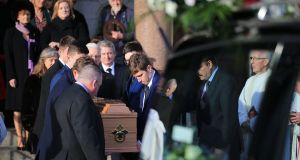 Níall Tóibín was widely loved, and “the support from friends and extended family this past week has been tremendous”, the late actor’s son Seán said at the end of his father’s funeral Mass at Mount Argus in Harold’s Cross, Dublin, on Monday afternoon.

“Whatever sins he did commit were mainly of the temperamental sort. He paid in spades and he atoned and he squared with the house,” he said. “We will miss him tremendously.”

“My mother was once asked, a long time ago, did she have a happy marriage, and she said it was an Irish marriage,” Seán Tóibín recalled. “What she meant, I think, was that two people could fall in love and spend the rest of their life finding their feet. They did find their feet.”

His father also had a theory on eulogies – “he had a theory on absolutely everything”. He believed families shouldn’t do them as “it was terrible pressure”. He believed actors should do the eulogies, adding that “after it was over they could blame the actor for getting it all wrong”. No one liked actors, he had added.

Then, when it was pointed out to him by Seán that he was an actor, he responded that, no, “I’m a star!”

Mass celebrant Fr Brian D’Arcy recalled how when Níall’s wife, Judy, died 17 years ago, “most of us thought Níall would not be far behind because they were such a close couple, he was so broken-hearted when Judy departed from this world. But God had other plans.”

He recalled how Mr Tóibín was once asked in an interview whether his politics were of the left. “He said, ‘Yes, as it should be for every Christian’. Which is a fair statement to make.”

Níall Tóibín “wasn’t just an actor. He was a man who knew the power of art to change the world,” Fr D’Arcy said. He was “a great actor, he was a great mimic, he was a great comedian but he was a great man, which is far more important than any of the other things.

“He was a man who struggled with life, who suffered through a lot in life, who tried to overcome himself. All of us have demons to overcome and all of us have gifts to share. It’s a great struggle to know your demons and know your gifts. Níall did, and that’s a wonderful thing to say about any man.”

Playwright John B Keane had said of Níall Tóibín’s performance as the Bull McCabe in his play The Field, that the actor had been “the smallest Bull he ever saw but nobody raged as seriously as this one”, Fr D’Arcy said.

He had also “made Cavan famous” and was asked to open the Slieve Russell hotel in Ballyconnell. It was attended by about 1,200 people.

“He stood, the two hands in the pockets, doing his Behanesque thing. And he looked up at the chandeliers and he looked down at the beautiful woodwork by the stage and he stood at least a minute and a half without saying anything. And then he said, ‘So this is what ye were saving for,’ ” Fr D’Arcy said.

Also there were lord mayor of Cork John Sheehan and former lord mayor Mary Shields, who in 2015 had presented Níall Tóibín with the Freedom of the City of Cork, which was, as Fr D’Arcy put it, “the second greatest honour he had in his life. The first honour, of course, was marrying Judy.”