Life in direct provision: ‘I felt like I didn’t fit in’

How the label of asylum seeker made Sara Althabhaney feel uncomfortable 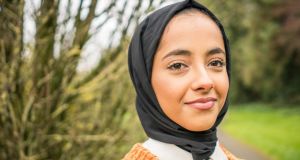 When Sara Althabhaney started school in Ireland three years ago it wasn’t her skin colour or accent that made her stand out.

Yes, she was one of the first students to come here from Yemen and she wore a headscarf. But it was the fact that her classmates automatically labelled her as an asylum seeker that made Althabhaney deeply uncomfortable.

“Coming to a place where you know absolutely no one is intimidating. It’s a different culture and different people and you don’t know how to make friends. People know you’re an asylum seeker the moment you walk into school and then there’s the stigma of why is she here. They wonder is she just here for economic benefits?”

Brought up in Yemen, a country now crippled by four years of civil war, Sara Althabhaney left the country with her mother and three siblings in 2016. The family sought asylum in Ireland and spent a few weeks in the Balseskin direct provision centre in Dublin before being transferred to Ballyhaunis, Co Mayo.

People can walk in whenever they want for inspections. That lack of privacy takes a toll on you

Most people presumed the family had come from Syria. “Everybody that spoke Arabic was from Syria but I was from a different country. People were interested in talking to me, but I also felt like I didn’t fit in with them.”

She quickly noticed a divide in the town between the immigrant population and those with Irish background. “In Ballyhaunis there’s always that separation between Muslim and Irish people. Most foreign kids hang out with foreign kids, the Irish stay together. They talk to us but we don’t hang out with each other.”

Althabhaney describes the Old Convent direct provision centre where she lives as one of the “good centres” with a friendly manager and staff who are willing to help. However, she believes the direct provision system must end. “...There’s a lack of privacy, it’s not your property. People can walk in whenever they want for inspections. That lack of privacy takes a toll on you.”

The Althabhaney family has received their refugee status and is in the process of applying for the housing assistance payment (Hap). However, as her mother does not speak English, Althabhaney and her brother have taken on the paper work. “We have to run around trying to figure out what to sign and how to fill out forms correctly because if you mess one thing up and it takes two months and is rejected, that’s two months wasted.”

You feel like you ran away from your country for safety but then you’re disrespected. People should be treated like people

The past three years have forced Althabhaney to grow up faster than most of her peers. “Living in direct provision you have to mature at a higher speed. You have to take on responsibilities, you have so much to take care of. If I was back home I would still be that teenage kid who was very dependent.”

Moving abroad has also opened the young student’s mind. “Before coming here I didn’t know much about asylum seekers. I had that idea of people living in tents and camps. But not everybody seeks asylum for war reasons. People have personal things they have to get away from. You feel like you ran away from your country for safety but then you’re disrespected. People should be treated like people.”