Children in direct provision: ‘Many are locked in their rooms’ 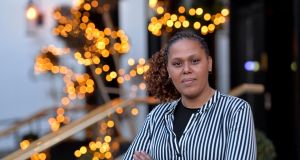 Mavis Ramazani, originally from South Africa, has described the guilt she felt as a mother raising her daughter in direct provision. Photograph: Alan Betson / The Irish Times

On Saturday, October 5th, 2019 Mavis Ramazani stood on the stage of Dublin’s Liberty Hall and described in detail the guilt she felt as a mother raising her daughter in direct provision.

“Every day I ask myself what kind of child am I raising? These are young people with dreams who are talented but they are going nowhere slowly. The reality is their lives are being slowly destroyed. The system is destroying lives; it’s inhumane.”

Her words echoed the sentiments of Donnah Vuma who told the Oireachtas Committee for Justice and Equality in May how her children could not take part in extra-curricular activities or join school trips. Her nine-year-old son has shown signs of depression, said Vuma, a member of the Movement of Asylum Seekers in Ireland (Masi). “He has come to me and said, ‘sometimes when I feel sad I feel like killing myself’.”

The long-term implications of growing up in direct provision have been repeatedly flagged over the past decade. When it was established in 2000, nobody envisaged so many children would spend their most formative years in the system, says human rights lawyer Noeline Blackwell. “It never ran into our heads that children would grow up without a place to crawl.”

Direct provision directly conflicts with a child’s right to an adequate standard of living, according to former special rapporteur on child protection Prof Geoffrey Shannon. Housing children in these settings leads to a loss of autonomy and institutionalisation, said Prof Shannon in 2018.

In a 2012 report, the Irish Refugee Council said the system was in effect “State-sanctioned poverty” with children forced to share confined spaces with adults and sometimes witness violent and sexual behaviour.

Children need space to play with other kids and do their homework. They need to burn their energy outside but many are locked in their rooms

Following its first inspection of direct provision for families in 2015, Hiqa reported cases of mental health issues, physical abuse due to excessive physical chastisement, older children being left to care for younger children, exposure to domestic violence and inappropriate contact from some adults living in close proximity to children.

Overcrowding in centres means children cannot fully develop while parents feel unable to carry out their care duties and fear becoming a “danger” towards their families because of mental health struggles, says Tanya Ward, of the Children’s Rights Alliance.

In direct provision, children are deprived of the right to develop and grow, says Lucky Khambule from Masi. “Children need space to play with other kids and do their homework. They need to burn their energy outside but many are locked in their rooms. They grow up hearing a foreign voice saying ‘no’. That damages.”

The 2015 McMahon working group review of reception centre conditions recommended an increase in the weekly allowance, on-site homework clubs for children and the re-instatement of community welfare services for residents. It signalled a change in the conditions of centres, with a more concentrated effort to develop family-friendly settings.

However, children growing up in the system still face numerous barriers, particularly when they finish secondary school and are unable to continue into third level. Some Irish universities have launched scholarships for asylum-seekers, but most students cannot carry on unless they pay international fees.

In 2015 the Government introduced a student grant support scheme for asylum-seeker students who had spent at least five years in an Irish school. Earlier this year the five-year rule was reduced to three.

While the number of unaccompanied children who disappear has dropped in recent years, it remains a problem

While most asylum-seeking children come to Ireland with family, some arrive alone. Since 2011, unaccompanied minors have been either placed with a foster family or in a specialised care home under the auspices of Tusla, the Child and Family Agency. However, for the first decade of this century, many of them were left to live unsupervised.

Last year, 129 unaccompanied migrant children, most aged 15-17, were referred to Tusla. While these young people are initially looked after, when they turn 18, if they do not have refugee status, most are transferred to a direct provision centre often in a different part of the country. This sudden relocation can damage young people who are in the process of rebuilding their lives, says Ward.

While supports for asylum-seeking families and unaccompanied minors have improved in recent years, these changes are overshadowed by the emergence of emergency facilities, says Ward. The 36 emergency accommodation centres, which have opened in private B&Bs and hotels in the past year, are not properly regulated and it remains unclear whether all children in temporary accommodation are enrolled in school.

“All the advancements and improvements in the system are now under threat because they’ve run out of accommodation options. I think it’s going to worse rather than better.”

Foster and O’Neill announce more lockdown relaxations in Northern Ireland 16:46
Deadline for Covid-19 loan and mortgage breaks will not be extended 15:50
Woman forced to stay in psychiatric unit due to nursing home uncertainty 15:48
Church closes its doors after flouting public health rules 14:30
Covid-19: Councils to receive funding to widen footpaths 14:03

1 All students will not return to school even if social distancing rules are relaxed – McHugh
2 Emily Maitlis thanks BBC viewers for support after Cummings row
3 Church closes its doors after flouting public health rules
4 ‘Stick to the guidelines’ – People warned not to gather in crowds as sunny weekend approaches
5 The human cost of Covid-19: Ireland's care homes with the most deaths revealed
Real news has value SUBSCRIBE