Irish people with disabilities still ‘locked out’ of public spaces 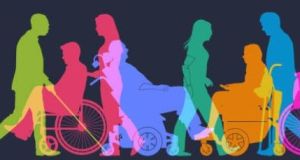 The Irish Wheelchair Association found that 68% of people with physical disabilities still find that public toilets, lifts, emergency exits and parking machines do not cater to their needs

More than seven out of 10 people with physical disabilities in Ireland have little or no access to public spaces and amenities, while two-thirds continue to report difficulties in accessing public buildings, the Irish Wheelchair Association (IWA) has said.

In a survey of nearly 1,000 people, the charity also found 68 per cent of people with physical disabilities still find that public toilets, lifts, emergency exits and parking machines do not cater to their needs.

More than 60 per cent of respondents said they often found there was poor or no accessible public parking at public buildings, while 73 per cent have to navigate steps when they arrive at the main entrance of public buildings.

Tony Cunningham, IWA’s director of property, housing and access, warned that people with physical disabilities continued to be “locked out of public spaces and buildings”, and that Irish building regulations were making simple day-to-day activities “needlessly complicated” because of their “extremely narrow view of accessibility”.

He said builders, architects, local authorities and design professionals must be made more aware of what accessibility actually means, noting that many accessible toilets continued to pose problems for wheelchair-users.

“So many of our members talk to us about so-called ‘accessible toilets’ that don’t fit a wheelchair with the door closed, ‘accessible parking’ without level access to the adjacent footpath, or a path without an access ramp to a building entrance.”

He said the decision by many cafés, pubs and restaurants to move their customers outside during Covid-19 to keep businesses open meant wheelchair-users were “struggling to navigate the reduced space on paths in our towns”.

Wheelchair-accessible housing designs must also be reviewed so that new builds have higher accessibility standards and bring new stock for wheelchair- users into the housing market, said Mr Cunningham.

The charity, which marks its 60th anniversary this week, is calling for a review of national building regulations around wheelchair-accessible housing in conjunction with the release of its new guidelines for designing accessible environments.

The guidelines, which were last published in 2014, set the standards for accessibility across construction, housing, retail, tourism, public amenities, hospitality and sport, and include submissions from the National Council of the Blind, Inclusion Ireland and the Royal Institute of Architects of Ireland.

The charity has called for all groups involved in planning, building and design to adopt the latest guidelines so “people with disabilities can live the live they choose”.