Man who died while kite-surfing on Dollymount beach named locally 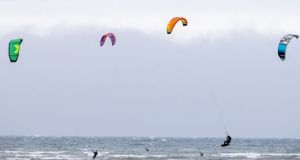 A man who died while kite-surfing in Dublin on Saturday has been named as Ger Fennelly (39).

An experienced kite-surfer, he got into difficulties while taking part in a charity event at Dollymount Strand at about 9am.

Emergency services, including the Coast Guard and ambulance services, were called to the scene. He was removed from the water but pronounced dead at the scene. His body was taken to the Mater Hospital.

“Ger was out kitesurfing for the charity, Mental Health Ireland,” his sister Elaine Fennelly said. “Some of the lads had dressed up for the event, for Hallowen.”

In statement, Howth Coast Guard said on Saturday: “The Irish Coast Guard emergency operations centre this morning at 09.14 received a call reporting a kitesurfing incident on Dollymount Beach and requesting assistance for the National Ambulance Service and An Garda Síochána who were proceeding to the scene.

“The casualty was transported off the beach by Coast Guard 4x4s to an awaiting NAS ambulance at Dollymount causeway.”

Mr Fennelly had been involved in kite-surfing for 14 years, according to the Piranha Triathlon Club of which he was a “longstanding and respected member”.

A tribute to him on the club’s website said Mr Fennelly had been an active member and “friendly face” in the club.

“Ger volunteered his time and energy freely, leading out many Sunday spins and always helping with the club race.

“Ger loved triathlon, representing Piranha at many triathlons around the country and abroad. He was always a welcome sight at any club training session or race.”

It said Mr Fennelly had completed Ironman Barcelona in 2018 and had written about achieving the goal while also living with Type 1 diabetes.

“Ger made a lasting impression on many in the triathlon community and will be sorely missed by all who knew him. He had a wonderfully positive outlook on life, was a kind soul and a true gentleman,” it said.

He is understood to be survived by his parents and sister Elaine Fennelly.