Murdered children and their mother laid to rest in single plot 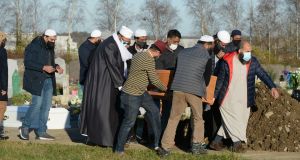 Mourners carry the coffin of Seema Banu before her burial in Newcastle, Co Dublin. Photograph: Alan Betson / The Irish Times

The father of murder victims Asfira Riza Syed (11) and Faizan Syed (6), and husband of their mother Seema Banu Syed (37) crouched on the ground by their open coffins, stroked their faces and wept at their funeral in Dublin on Friday.

Sameer Syed led mourners as the three were laid to rest in a single plot, in the Muslim section of Newcastle cemetery in Dublin. His wife Seema’s oak coffin was lowered in first, followed by the white coffins of their son and daughter.

Gardaí are continuing their inquiry into the three deaths after their bodies were found at their home at Llewellyn Court in Ballinteer on October 28th. The children died by strangulation while the precise circumstances of Ms Syed’s death remains unclear.

Though her family, in the Mysuru city area in Karnataka, India, had sought to have the bodies repatriated for burial it was Mr Syed’s wish that they be buried in Ireland. Funeral prayers at the Islamic Cultural Centre in Clonskeagh, and burial, were live-streamed to the family.

The bodies had been washed and shrouded according to the Muslim tradition at the Islamic centre on Friday, before being placed in coffins and brought into the mosque, for the Salat-al-Janazah, or funeral prayers.

The brief service, led by Imam Hussein Halawa, took place shortly after 1pm. During it, the sound of children at the centre’s Muslim national school playing outside, could be heard.

Two hearses brought the coffins on the 30km journey to the west Dublin cemetery, where Mr Syed with others lifted the coffins out and to the ground, for a second Salat al-Janazah, led by Imam Jameel Mutoola of the Irish Suffi mosque. Mourners removed their shoes for the prayers in Arabic.

Several members of An Garda Síochána, in plain clothes, remained near the cemetery entrance for the duration of the burial service.

The coffins were carried from the small car-park area to the site of the grave and laid side-by-side, parallel to it. Here they were opened and mourners, who included members of the Muslim community, neighbours from Ballinteer and the Indian ambassador Sandeep Kumar, were asked to step back as Mr Syed crouched down beside them.

He unwrapped the white shroud from around his wife Seema’s face, leant in to touch her, kissing his fingers first, and prayed. He repeated this process, first with Asfira Riza and then with Faizan, becoming increasingly upset. As the coffins were re-closed a number of mourners stepped forward to help him stand up.

After the coffins were lowered one by one into the grave mourners each threw three handfuls of soil in over the last coffin, of Asfira Riza, in keeping with Muslim tradition. The filled grave was then covered with roses, daisies and carnations.

Further prayers, in Arabic and English, were led by Iman Mutoola and Umar Al Qadri, chair of the Irish Muslim peace and integration council.

As mourners dispersed, Mr Syed remained kneeling at the head of the grave, his eyes closed and his hands outstretched in prayer, for several minutes.