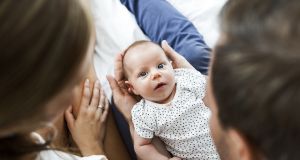 As most employers do not top up parent’s benefit, ‘it is possible to conclude that the scheme does not address the existing disparity in leave entitlements or the low uptake rate of paternity leave’. File photograph: Getty

Paid parental leave, introduced to encourage greater gender equality, does not meet its policy objective because rates are too low and companies are not topping-up to match salaries, a Department of Public Expenditure spending review warns.

The relatively new scheme entitles both parents to two weeks’ paid leave in a child’s first year, paid at €245 a week from the Social Insurance Fund (SIF), known as parent’s benefit.

It was introduced in last year’s budget following an EU work-life balance directive to encourage better sharing of leave between parents and to address under-representation of women in the labour market. It is in addition to 26 weeks’ paid maternity leave and two weeks’ paid paternity leave.

However, though maternity and paternity benefits are topped up to match a worker’s salary in the public service, and by many private sector workplaces, parent’s leave is not in the former or most private companies.

The review says the SIF rates for the three Irish schemes are “relatively low” and notes other EU member states aim to replace income to a greater extent. Longer-paid parent’s leave is also common in other countries.

“This suggests that the current structure of paternity leave is not delivering large-scale uptake, and therefore does not encourage more equal sharing of parental leave between men and women,” states the report, adding the low uptake “appears closely related to the number of organisations offering salary top-ups”.

In some cases where families have fixed costs, like housing and childcare, variations in household income cannot be sustained.

“This introduces a potential inequity in paternity and maternity leave, where the ability of both parents to take the leave could be dependent on the employer decision on salary top-ups rather than the state’s provision of SIF payments.”

As most employers do not top up parent’s benefit, “it is possible to conclude that the scheme does not address the existing disparity in leave entitlements or the low uptake rate of paternity leave.

“As such it is unlikely to support families in the more equal sharing of care responsibilities or address women’s under-representation in the labour market,” says the report.