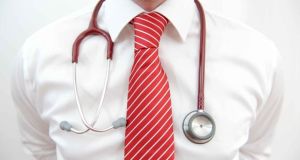 Public health specialists earn € 113,822 at present. Hospital consultants with a type-A contract - which permits them to treat only public patients - have a pay scale that ranges from €141,026 to €195,653. Photograph: Andrew Matthews/PA Wire

Public health doctors seem set to ballot for strike action over pay. The move follows what the Irish Medical Organisation (IMO) said was “a deeply disappointing “ meeting with the Department of Health on Thursday.

The public health doctor committee of the IMO is expected to consider a date for a ballot for industrial action when it meets on Friday.

A meeting of the wider public health doctor membership of the IMO is likely to take place on Monday.

Public health doctors are playing a key role in dealing with the Covid-19 pandemic.

Last month the Cabinet approved the introduction of new legislation which would allow the Government to increase pay for certain groups.

Chairwoman of the IMO Public Health Committee, Dr Ina Kelly said the meeting with the Department of Health on Thursday had made a bad situation worse.

“We went hoping to make progress but we have come away more frustrated and angry,” she said.

The Department thinks it can delay this issue and tie it up with future structures and reforms. We will certainly discuss and engage on much needed reforms but we will do so as consultants and not before we have secured that long overdue respect.”

She said while the IMO remains available for talks” it seems that we have no option but to proceed with our ballot before the end of November which has already been agreed at a meeting of IMO members”.

“No doctor wants to take industrial action but such is the disappointment, frustration and low morale of our members in the face of Government disrespect we expect to receive an overwhelming mandate,” she said..

“The Public Health Committee will be holding a series of meetings in the coming weeks to plan for the ballot and any industrial action which we hope will not be necessary but for which we must plan.”

A spokeswoman for the Minister said he was committed to the establishment of a consultant-led public health model.

“The Department and the HSE are finalising a proposal on consultant posts which they will submit to Department of Public Expenditure in mid-November.”