Average of almost 2,000 women and 411 children in receipt of support each month 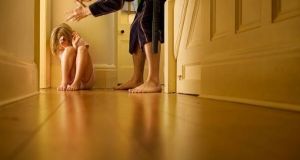 The number of children receiving support peaked in August when 578 children accessed services, a 36 per cent increase on July figures. Posed photograph: Getty

There was a sharp increase in the number of women and children seeking support from domestic violence services during the first six months of the Covid-19 pandemic.

New figures show an average of almost 2,000 women and 411 children were in receipt of some kind of support from domestic violence services – such as a refuge, counselling, accompaniment, information or advice – each month since last March.

Of those women and children, an average of 575 women and 98 children accessed the service for the first time.

The number of women accessing services decreased by 8 per cent between March and April as lockdown restrictions were put in place across Ireland.

Since April, however, the number of women accessing services has steadily increased each month, with August being the only month which which saw a decrease.

The findings are contained in a report by Safe Ireland – a national agency which works with domestic violence agencies – based on data collected monthly from 31 services.

The Tracking the Shadow Pandemic report also shows the number of children accessing services has risen each month with June the only month which saw a decrease.

The number of children receiving support peaked in August when 578 children accessed services, a 36 per cent increase on July figures.

The pressure facing services is evidenced in data which shows that more than 1,300 requests for refuge could not be met due to lack of space. That is an average of 225 a month or eight requests a day.

It says initially there was a lack of guidance and support from the child and family agency Tusla with very little if any personal protective equipment (PPE) provided and no guidance regarding health and safety protocols.

There were also closures with outreach support services and accompaniment services suspended initially. Child and youth services also closed, meaning that children were with their mothers all the time.

Services got busier towards the end of May, the report states, putting additional pressure on staff to support residents and respond to calls.

Safe Ireland said its tracking study is continuing and indications are that the second lockdown, introduced almost three weeks ago, is resulting in further increased numbers of women seeking support and safety, often fleeing from heightened and severe levels of violence.