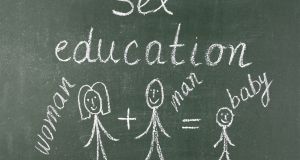 Young people who discuss sex and relationships with their parents are significantly more likely to go on to use contraception, a new study shows.

In contrast, those mainly reliant on their friends as a source of information on sex had lower levels of contraceptive use when they first had sex.

The findings are contained in research by the ESRI and HSE which analyses how young people receive information on sex and relationships.

It is based on data from Growing up in Ireland, a longitudinal study which interviewed teenagers at 13 and 17 years of age.

Many teens are not getting advice on sex from their parents, the report shows.

By age 13, 45 per cent of young people reported that they had discussed sex and relationship issues with their parents. By age 17, this proportion had increased to just under 60 per cent.

Young people who had better quality relationships with their parents were more likely to talk to them about sex and relationships.

There was a gender divide in reports of ease of discussions with parents about sex.

At age 13, parents or family members were the main source of information about sex but, at age 17, friends were the most commonly cited source .

Nearly a quarter of young men and 20 per cent of young women at age 17 cited the internet/TV/films/books as their main source of information.

Most young people reported receiving sex education in school, though the quality or extent of this varied.

At age 13, just over half – 55 per cent – reported that they had received relationships and sexuality education (RSE) at school. This proportion increased to 92 per cent by age 17.

There was significant variation in RSE across individual second-level schools, supporting previous Irish research that finds that leadership at the school level plays an important role in the delivering of sex education.

At age 17, one in three young people reported having had sexual intercourse.

Nearly 90 per cent of young people who have had sexual intercourse reported using contraception when first having sex.

In addition, nearly a quarter of young people expressed regret over the timing of their first experience of sexual intercourse, and this proportion was substantially higher among young women than young men.

Anne Nolan, a co-author of the report, said the findings show that the quality of the relationship between parents and their children is a key determinant of whether discussions about sex and relationships take place.

Co-author Emer Smyth added the findings also show a significant group of young people are not receiving information or advice on sex from their parents, making school-based relationships and sexuality education all the more important.

“The findings support the current move towards considering sexual wellbeing as part of broader school efforts to support young people’s wellbeing,” she said.

Moira Germaine, education and training manager from the HSE’s sexual health and crisis pregnancy programme, said “what parents do matters”.

“Not only can parents have this specific protective influence, they can also help their child to develop all the attitudes, values and behaviours necessary for forming and maintaining healthy relationships, including, in adulthood, healthy sexual relationships.”

She said the HSE is introducing a range of resources to support parents in talking with their children about relationships and growing up. These are available to order for free from healthpromotion.ie and for download from sexualwellbeing.ie.