Backlog of 20,500 people eligible for Irish citizenship waiting to be sworn in by judge 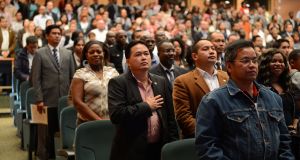 More than 2,000 people are due to be sworn in as Irish citizens in Killarney, Co Kerry next Monday and thousands more are expected to receive citizenship in the first two months of next year following a delay in holding the events.

The decision to restart the ceremonies comes nearly a month after the Court of Appeal overturned a ruling that applicants for Irish citizenship needed unbroken residence for one full year in Ireland before applying to be citizens.

Thousands of applicants were left in limbo in July when High Court judge Mr Justice Max Barrett ruled that any person applying for citizenship could not spend a day outside Ireland in the year before applying.

While applications continued to be processed, ceremonies were put on hold, and this led to a backlog of 20,500 people waiting to be sworn in as Irish citizens by a judge. The Government has said it aims to deal with the backlog by the end of February.

Former High Court judge Bryan McMahon will preside over the two ceremonies taking place on Monday in the Gleneagles Hotel convention centre, at which participants from 103 countries are to receive Irish citizenship. It is understood that the ceremony is being held to swear in those under pressure to receive their citizenship as quickly as possible for professional or personal reasons.

Participants in the event will include 317 people from Poland, 260 people from the UK, 184 people from Romania and 169 people from India. Citizens of Nigeria, Brazil, Latvia, the Philippines, the US and China will also receive Irish citizenship next week.

About 127,000 people have received Irish citizenship since the ceremonies first began in 2011.