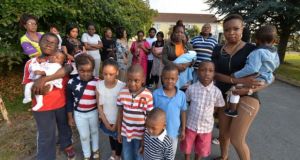 A faculty of one of Ireland’s leading medical training colleges has called on the Government to abolish the system of direct provision for housing asylum seekers over concern for the welfare of children.

A new report by the Faculty of Paediatrics at the Royal College of Physicians in Ireland has recommended that applicants for international protection with children should be placed in more appropriate accommodation.

The main author of the report, Dr Niamh O’Brien, a specialist registrar in paediatrics, said it was regrettable that Ireland, as a country with a significant history of harm done to children in institutional care, did not seem to have learned from past experiences.

Dr O’Brien described the system of direct provision as “unethical, stigmatising and needs to end”.

She claimed Ireland could no longer ignore the plight of children living in direct provision who were vulnerable to mental health issues and were over-represented in admissions for burns as well as finding it difficult to integrate into society.

The dean of the faculty, Ellen Crushell, said paediatricians were very concerned about the welfare of children and young people who were living in direct provision.

Dr Crushell said the system is having a hugely negative impact on a child’s wellbeing that could have far-reaching effects on their mental health into adulthood.

She claimed such children were at a higher risk of physical and mental health problems and were far more likely to be referred to Tusla than children living in other types of settings.

“Direct provision does not adequately meet the needs of children and their families in terms of security, family, autonomy, nutrition and access to education and health services,” Dr Crushell said.

The RCPI report pointed out that studies had shown that 94 per cent of international protection applicants had experienced traumatic events before arriving in Ireland and required treatment for post-traumatic stress disorder, depression and anxiety but only a very small minority had received treatment.

“The effects of adverse childhood experiences can be lifelong and Irish society must do all we can to avoid adding to the stressful experiences these families have already experienced,” Dr Crushell remarked.

She claimed children in direct provision often faced major barriers in accessing healthcare because of problems with language, transport and medication costs.

“Children need to have the right to live in an environment that fully supports them and encourage them to reach their full emotional and developmental potential,” said Dr Crushell.

The college noted there were almost 1,800 children living in direct provision at the end of last year, with many having spent prolonged periods in such housing.

While it welcomed a reduction in the average length of stay in direct provision centre to 14.3 months it said such a timeframe was “still a lifetime for a young child”..

As interim measures, the report said families in direct provision should be given their own-door accommodation and a private living space as well as self-catering facilities.

It also recommended increasing allowances for schools and clothing expenses as well as improving access to psychotherapy and psychological services and increasing funding for vaccinations.

Commenting on the report Minister for Children Katherine Zappone has described direct provision as “not an ideal system”.

Ms Zappone told RTÉ radio’s Morning Ireland on Wednesday that it was important the Government listens to the expertise of the doctors.

The new report has recommended that applicants for international protection with children should be placed in more appropriate accommodation.

“I knew this before this report. It is really important that the Minister for Justice examines this. “I take note of what the report found and cannot disagree.”