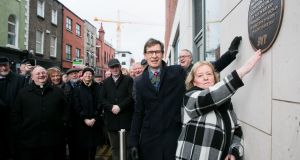 (L TO R) Kieran Stafford, SVP national president & Bernie Hogan, President of St Michan’s Conference,during an unveiling by the Society of St. Vincent de Paul (SVP) of a plaque where the first meeting of the Society was held in Dublin 175 years ago on Charles Street West, Dublin. Photograph: Gareth Chaney/Collins

A plaque marking the place where the Society of St Vincent de Paul first met in Ireland, 175 years ago, was unveiled in Dublin on Sunday.

The founding meeting to introduce the society to Ireland took place on December 16th 1844 and was attended by seven men in the White Cross Rooms on Charles Street West, Smithfield.

During 1845 five branches were established in Dublin.

The SVP had been founded in Paris, France in 1833 by Frédéric Ozanam and Emmanuel Bailey, to help the poor. Its mission was also that members should “sanctify” themselves in the service of the poor.

National president of the SVP, Kieran Stafford said since its establishment in Ireland the society had provided help and support to hundreds of thousands of people through the Great Famine of the mid-19th Century, two world wars, the civil war and numerous recessions.

Today there are over 11,500 volunteers with the SVP and over 1,200 active “conferences” or branches.

“Sadly today we still see poverty in many different situations and circumstances. There are almost 750,000 living below the poverty line including 100,000 people at work and record numbers of homeless,” said Mr Stafford.

“We know and meet the people behind the figures every week bringing friendship and support.” he said.

The plaque can be seen at the Ormond Building on Charles Street West.