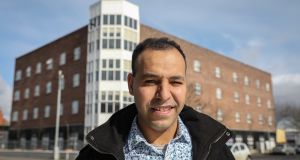 Hicham Lamchaali (36), from Morocco and South Africa, works 48 hours per week as a nursing home duty-manager. He remains, however, in a direct provision centre in Clondalkin, Dublin. Photograph: Crispin Rodwell

The number of people stuck in direct provision because they cannot get housing has increased by 65 per cent since the end of 2018.

Figures from the Department of Justice, published on March 3rd, showed there were 1,018 people residing in direct provision centres despite being granted either refugee status or international protection. The figures were provided to Sinn Féin spokesman on housing Eoin Ó Broin.

By last week this number had increased to 1,024 and compares with 620 in October 2018. Mr Ó Broin described the increase as “deeply worrying”.

He said: “These adults and children are effectively homeless and using direct provision as emergency accommodation. It confirms yet again that the Government have failed to address the housing and homeless crisis.”

Among them is Hicham Lamchaali (36), from Morocco and South Africa, who was recognised as a refugee in January 2019. A qualified nurse, he works 48-hours a week as a nursing home duty manager. He remains, however, in a direct provision centre in Clondalkin, Dublin.

“When I got my papers I was extremely happy. I felt, ‘The Irish have given me another chance to live.’ But finding a home is more difficult.”

He has been approved for social housing and the Housing Assistance Payment (HAP) by South Dublin County Council and has been searching for a home for seven months. From the start, he says, he sent “about 20 emails a day, every day” to prospective landlords and letting agents.

“But no one got back to me. I have had some viewings, two or three since then, but there were always about 25 other people there. I have not had any luck so far.”

He said he has had a “lot of help” from the Jesuit Refugee Service, though without success. Asked if he believes racism may be a barrier, he says he has thought about that.

“I think people are afraid. If I put myself in the landlord’s position, I am a stranger. The media makes refugees look bad. They [landlords] don’t want to take a chance on a stranger.”

He is restricted under the HAP scheme to prescribed rent limits in his area. The highest rate for a single adult, in a one-bedroom dwelling, in South County Dublin is €660 per month. The tenant pays a portion of this – a differential rent – to the council, which in turn pays the full rent to the landlord. He may exceed this, as he is effectively homeless, to about €800 a month.

However, according to the DAFT rental report for the end of 2019, one-bedroom apartments in south-west Dublin were commanding between €1,380 and €1,445 a month.

So he continues sharing a room with three other men in Clondalkin. He cannot cook for himself and cannot have visitors.

“I am working four 12-hour shifts a week. I can’t even sleep properly because some are coming in at midnight, or leaving at 8 am. I have to wake at five o’clock in the morning for work and I am tired. I do a lot of running and that helps me get my frustrations out.

“I have a lot to live for. I am a positive person. I have a lot of friends in Clondalkin. I am involved in a lot of voluntary work.”

A spokesman said the Department of Justice had a team in the International Protection Accommodation Service (IPAS) unit working on the issue. A number of NGOs were funded to support people to move on from direct provision, he added. These were Depaul Ireland, the Jesuit Refugee Service and the Peter McVerry Trust.

Ongoing liaison with the Department of Housing had resulted in over 1,000 people moved from accommodation centres into housing since January 2019, he said.

Mr Ó Broin said: “The only solution is to dramatically increase the delivery of social housing through both the build and acquisition programmes.”