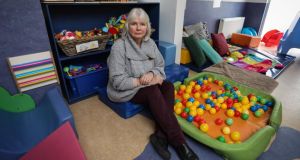 Joan O’Sullivan, Swords creche owner, who has had to shut her business following the closure of all schools and childcare facilities. Photograph: Crispin Rodwell / The Irish Times

The Department of Children and Youth Affairs has identified a potential funding shortfall of approximately €12 million per month in the creche sector, The Irish Times has learned.

The shortfall may arise due to a significant drop-off in payments from parents to creches on top of childcare subsidies.

Sources said they believed if the Covid-19 emergency measures are extended, childcare settings will either not ask parents to pay these fees, or parents will not be able to pay them, leading to millions of euros per month to disappear from the sector. There is deep concern within the department at the pressures this will create for some operators.

This will, in turn, create retention problems for employers, as childcare workers seek employment elsewhere. Significant numbers of childcare workers are from outside the State, and they may also return home, it is feared.

It is understood that the funding issues were raised at a stakeholders meeting in the Department of Children on Thursday evening.

Furthermore, it is thought that the issue has been raised by officials in the department who are trying to identify potential funding solutions with their colleagues in the Departments of Public Expenditure and Reform and Finance.

Creches and their employees are particularly vulnerable, because while schools and colleges have been closed, the State continues to pay wages to workers there. The majority of creches are privately run.

The funding shortfall will disproportionately affect so called “full service” childcare settings, which offer care to children from the age of six months and above. These younger children are not covered by the early childhood care and education (ECCE) scheme or National Childcare Scheme (NCS), under which the lion’s share of state income is generated.

Their business model largely relies on top-up payments from working parents, which, if they do not materialise, will put them under severe pressures.

Frances Byrne, director of policy and advocacy with Early Childcare Ireland, the industry group representing creches and other childcare settings, said full service settings accounted for about 34 per cent of all facilities in the State.

“There will be a cohort of those that have a very high dependency on fees on a day-to-day basis in terms of their income,” Ms Byrne said.

Many of these businesses are in cities and often have parents in higher income positions, or children who come from households where both parents are working full time.

“If we end up in a situation where this drags on, for the best of public health reasons... we’re concerned we could be facing into very serious sustainability issues.”

Joan O’Sullivan, owner/manager of Little Footsteps creche in Swords, which has eight staff and 32 children, said her immediate future had been secured through conversations with parents.

“The next couple of weeks are secure, after that, I really have no idea what will happen,” she said.

“My service is quite small, will we survive? I don’t know. There’s no doubt employers may be making huge efforts, but if this extended, employers won’t be able to pay and then parents won’t pay us.”

“State funding won’t cover our mortgage and our wage bill. What does the future hold? I don’t know.”

The stakeholder meeting also discussed potential plans to provide childcare for frontline workers key to the efforts to contain Covid-19. Several options were mooted, including childcare workers otherwise employed in creches acting as babysitters, or creche settings being established near hospitals. However, each one brings practical and public health challenges, and would need the approval of the Chief Medical Officer, sources said.

The HSE said in a statement that it was “very encouraged by the attendance levels and the response of our staff and their supports following the announcement yesterday and we are grateful for that”.