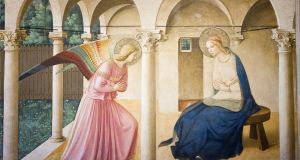 Clearly the liturgical year was compiled by a man. The feast of the Annunciation (when the angel Gabriel shares God’s saving plan with Mary) falls on March 25th, exactly nine months before Christmas Day, the feast of the birth of Christ. Apparently Jesus, as the perfect baby, did not keep his poor mother waiting for the birth any longer than he had to, and arrived precisely to schedule.

I often reflect on what a courageous, resilient woman she must have been, to rise so gamely to the unique demands made of her.

Again and again we are reminded in Scripture that nobody can be forced into the Kingdom of God, and when the Church loses sight of this it is a blasphemy.

Central to our faith is the precious notion of consent, and the incarnation was utterly dependent upon Mary’s consent to what was being asked of her.

The angel announced to her the news that she had been chosen and outlined to her what was going to happen and then . . . he waited. God’s plan was conditional upon her response.

Mary asked questions – sensible, assertive questions – and then she said “Yes! I’m in! So be it! I trust you Lord!”

Mary inspires us because she goes ahead of us.

Her yes to God led her to places of great joy but also places where none of us would wish to go.

But it is a fact of life that love will inevitably be costly, and at times will feel like a pain in the heart instead of a joy.

I remember my Auntie Mary saying to me that the hardest thing in the world is to watch someone you love suffer, and she was so right.

She knew this to her cost because Uncle Frank’s last years were full of suffering – he had to be cared for in a nursing home instead of at home, and this was a great agony for both of them.

Mary the mother of Jesus was to know this pain in her heart as her as-yet-unborn baby’s journey through life unfolded.

In the film The Passion of the Christ there is a pivotal scene when Mary turns her face away from the suffering of her son carrying his cross on this first Good Friday.

Into her mind flashes an episode from his childhood when as a little boy he fell and hurt his knee. He called for his mum (as children always do when they are in pain) and she comforted him.

Now a grown man, bleeding and abused and staggering to his place of execution, Jesus still needs her.

She can no longer make everything all right by kissing his knee.

But she can refuse to abandon him, come hell or high water. She can choose not to look away, and she accompanied him to the end, and beyond.

Most of us, by the grace of God, are not called to cradle our dead children in our arms, though some of us may be, or may have been, and such scenes are playing out right now all over the world.

But many of us have to deal with watching someone we love suffer, and it can feel unbearable.

Let it comfort us that Mary was called into this dark place also.

Mary inspires and encourages us to say yes to God, whatever joys and sorrows lie in store.

If God is our Father and Jesus is our brother, by adoption, then Mary is our mother also.

The psalmist tells us that “Those who look to him are radiant”, and if Mary is radiant it is because she is always pointing beyond herself to her beloved Son.