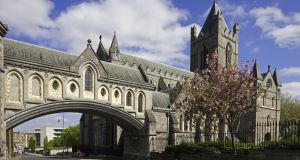 Irish churches are already cancelling events planned for well past the March 29th date to which current coronavirus restrictions apply.

The Bishop-elect of Achonry Fr Dempsey, currently based at Newbridge Co Kildare, said he had requested the installation ceremony at St Nathy’s Cathedral, Ballaghaderreen, Co Roscommon, “be rescheduled until sometime in the summer”. He said “it would not have been appropriate to proceed with the (episcopal) ordination at this time. “

He expressed gratitude to papal nuncio Archbishop Jude Okolo “the priests, religious and faithful of the diocese of Achonry for their patience and understanding as we deal with the unprecedented consequences of Covid-19 in our country and in our world.” He was also grateful to Bishop of Kildare & Leighlin Denis Nulty “who has asked me to continue for the moment as parish priest in Newbridge”.

In Northern Ireland the May 1st installation of Church of Ireland Bishop-elect of Connor diocese, Archdeacon George Davison in Belfast, “will be now be a private service” with a small congregation due to the Coronavirus pandemic.

The Connor diocesan synod, scheduled for almost two months later, on June 25th, has been postponed.

Meanwhile in Italy 10 Catholic priests have died from the Coronavirus, six of them in the northern province of Bergamo, home of Pope St John XXIII.

Since Monday last the Catholic Church in Ireland has suspended public Masses, though priests continue to celebrate it privately and using online livestreams. At 10.30 on Thursday morning RTÉ News Now broadcast Mass from the church of St Peter and Paul in Clonmel, Co Tipperary. Mass will be broadcast on the channel daily at that time until March 29th.

It will be followed each day by a religious message from representatives of Ireland’s other Christian denominations and faith communities.

In a statement on Wednesday the Irish Council of Imams, which represents 35 Imams at mosques all over the island of Ireland, announced that Friday prayers tomorrow, as last week and until further notice, have been cancelled. So too have functions “of all types” .