Religious services cancelled or curtailed due to coronavirus 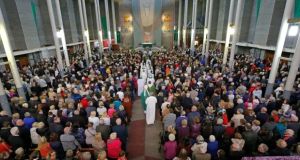 Most religious services across the State are being cancelled or restricted in light of the Government’s recommendations on reduced gatherings due to coronavirus.Photograph: Nick Bradshaw for The Irish Times

Most religious services across the State are being cancelled or restricted in light of the Government’s recommendations on reduced gatherings due to coronavirus.

On Thursday, Taoiseach Leo Varadkar announced a number of unprecedented measures to tackle the novel coronavirus, also known as Covid-19. One of the recommendations was to limit gatherings to under 100 people in indoor venues, and under 500 people in outdoor venues.

The Irish Bishops’ Conference, the representative body for Catholicism in Ireland, issued new guidelines to its bishops urging dioceses to abide by the Government recommendations.

The organisation said all non essential pastoral gatherings and meetings are cancelled; all confirmations are postponed until further notice; attendance at funeral services and Masses should be limited to close relatives and should not exceed 100 attendees and weddings and baptisms may proceed on the condition that fewer than 100 people attend.

The group said that churches should remain open for prayer each day but that “in the current emergency situation, all are dispensed from the obligation to physically attend Sunday Mass”.

“ Parishes should inform parishioners of the local possibilities to participate in Mass via local radio and online,” a statement says.

“It may be possible for some parishes to facilitate attendance at Mass while still observing the health authority’s limit of 100 people.”

Bishop of Limerick Brendan Leahy has confirmed that all Sunday Masses in his diocese will be cancelled for the next three weeks, or until “further notice beyond that”.

However, he said that parishioners can still participate in Sunday Mass by watching the livestream of the service online.

Bishop Leahy called for solidarity with those at risk, adding that it was “worrying and stressful”.

“Especially for the elderly, for those who are vulnerable to the virus due to underlying conditions, for all those who care dearly for these people and also for the healthcare workers who are so courageously out there on the frontline,” he said.

A spokesman for the Church of Ireland said the religion is advising parishes to “follow all public health guidance provided by State authorities”.

This means that services in the Republic will be restricted to 100 people, and any service which ordinarily has more than 100 people, are being asked not to proceed.

However, it is understood that there may be arrangements at a local level, whereby parishes run two or three services on a Sunday to spread the numbers out.

In Northern Ireland, Church of Ireland services will continue as normal because “the public health guidance regarding public gatherings is unchanged at this stage”.

However, the organisation has issued hygiene guidelines to its members attending these services, including a suspension of the sign of peace and that individuals administering holy communion must first use hand gel or wash their hands.

The Islamic Cultural Centre of Ireland said they have “banned any group prayer” around the country as a result of the virus.

“It is for the safety of everybody in our community,” a spokesman said. “We are advising people to pray at home, or pray at work but to avoid contact with groups of people.”

The recommendation is in place until March 29th of until the health guidelines from the government changes.