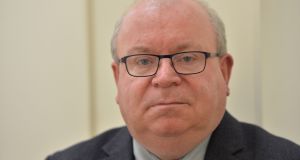 Brendan Kenny, Dublin City Council’s head of housing, said the local authority does not plan to build the proposed homes itself, but will use instead approved housing bodies to provide the social housing element. Photograph: Alan Betson

The construction of more than 700 social homes on local authority sites across Dublin will take up to a decade if councillors block land sales to housing associations, the council’s head of housing has warned.

Dublin City Council has selected nine sites, three on the southside and six on the northside, that are currently used as depots for its staff, vehicles and equipment, but could accommodate at least 745 homes.

More than 20 per cent would be senior citizens’ apartments, including homes for older people who want to downsize from larger houses.

Brendan Kenny, the council’s head of housing, said the local authority does not plan to build the homes itself, but will use instead approved housing bodies (AHBs) to provide the social housing element.

The council would sell the sites to the housing organisations at a reduction on the market value and the council would have “100 per cent nomination rights” in the allocation of the homes, he said.

Fianna Fáil councillor Mary Fitzpatrick said a three- to five-year process was “completely unacceptable” but that she did not “buy into the premise that AHBs are the only solution”.

Independent councillor Cieran Perry said he had a “huge difficulty with outsourcing of this work to the approved housing bodies”.

“No disrespect to them, they may take 100 per cent nominations but they are not State owned. We should be holding on to our land and we should be developing it ourselves.”

Green Party councillor Donna Cooney and Social Democrat Catherine Stocker also called for the council to develop the land themselves, while People Before Profit councillor Tina MacVeigh called for Mr Kenny to come back to the councillors with an “alternative report”.

Mike Allen, director of advocacy with Focus Ireland, said his organisation would be interested in developing some of the sites and it was “wrong” to characterise AHBs as in some way akin to the private housing sector.

Mr Kenny said if councillors did not endorse the plan it could “jeopardise the whole thing”.

Councillors decided a new report should be prepared by the council’s housing department on the options for the council developing the land itself before any decision was made.

To free up the nine sites, the council plans to build two larger works depots, first in Ballymun and later at Marrowbone Lane in the south inner city.