Small numbers at Sunday Masses and services, with most live-streamed

‘They say that in Wuhan, after so many years of noise, you can hear the birds again’ 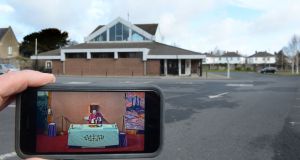 An empty car park as Fr Paddy Stanley says the Sunday 9.30am mass in St Brendan’s Church, Coolock, Dublin which was closed to the public but broadcast live on the webcam. Photograph: Dara Mac Dónaill

At a Mass in a nearly-empty St Andrew’s Church on Dublin’s Westland Row on Sunday morning, Fr Enda Cunningham asked “is God with us or not? Perhaps now, like never before, our faith is being challenged.”

The parish administrator called for special prayers for those who had no faith for whom the challenge of coronavirus “is all the greater”.

He told the small congregation about a WhatsApp message he got from Capuchin Br Richard Hendrick.

“But they say that in Wuhan, after so many years of noise, you can hear the birds again. They say that in Assisi people are singing to each other across empty squares keeping their windows open so that those who are alone may hear the sounds of family around them. They say a hotel in the West of Ireland is offering free meals and delivery to the housebound.”

Fr Cunningham suggested “ …open the windows of your soul and, though you may not be able to touch across the empty square, sing!”

At Dublin’s Pro Cathedral a woman reader welcomed those viewing the Mass on webcam. She thanked the small congregation for leaving a metre between each other. Holy Communion would be distributed only in the hand and there would be no leaflets “in keeping with hygiene,” she said.

There would also be no collections but that stewards at exits could collect “vital” offerings.

Mass celebrant Fr Kieran McDermott spoke of “the great comfort for all of us, taking into consideration the times that we are in, the crisis nationally and internationally, is that God is committed to healing us.”

At Dublin’s Church of Ireland Christchurch Cathedral Canon Sonia Gyles found it ironic that the Black Eyed Peas song Where is the Love? should come on her car radio last Monday “as I was driving back from the supermarket in which I had pretty much witnessed two women arguing over the last tray of tinned tomatoes.”

People bulk buying in the shops was a reminder of “our tendency towards selfishness and self-centredness, and with that our inability to be community,” she said. We now had “an incredible opportunity to show love for one another. Love, not as doctrine or feeling, but as an attitude.”

Speaking after the service, Church of Ireland Archbishop of Dublin Michael Jackson said that they were “trying to keep afloat” what they could.

“ I am utterly realistic, if regulations change we’ll change with the regulations,” he said.

People “must do their utmost out of civic responsibility to make sure that contagion doesn’t spread and that people are kept safe. And I would take my hat off to those who are anywhere in the front in line of this,” he said.

In Kerry, retired Bishop Bill Murphy remarked that it was “a strange thing, Mass in an empty church,” as he began 10.30am Mass at St Mary’s Cathedral in Killarney. As in many churches elsewhere in Ireland, the pews were empty with the Mass live-streamed to people at home.