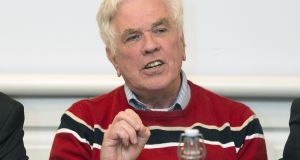 Campaigner for the homeless Fr Peter McVerry has said Fianna Fáil and Fine Gael would have to fix the housing crisis if they go into government ‘or get massacred at the next general election’. File photograph: Dave Meehan/The Irish Times.

Housing campaigner Fr Peter McVerry said he takes heart from the fact that a Fianna Fáil-Fine Gael coalition government would have to fix the housing crisis or the parties would face getting “massacred” at the next general election.

Addressing a public housing conference in Maynooth University on Wednesday, Fr McVerry said taking the necessary steps to solve the housing crisis – including holding a referendum on the right to a home - would “challenge the ideology” of the main parties.

“If they don’t produce the results they will just get massacred at the next election,” he said. “That is the choice facing them.”

Fr McVerry was speaking after a number of speakers criticised what was described as the State’s “public private partnerships” approach to housing provision .

Dr Orla Hegarty, assistant professor in the School of Architecture in UCD, said partnerships such as those envisaged at Dublin’s O’Devaney Gardens and on the Poolbeg Peninsula site were “high risk strategies”.

Dr Hegarty said there were sites “everywhere” where local authorities were hoping for an affordable housing dividend based on “60 per cent on of the houses being sold at high prices” by property developers.

She said the current skills shortage in the building industry should be addressed by providing long-term employment, as opposed to construction workers operating in “the gig economy”.

John O’Connor, chief executive of the Housing Agency, said what was “needed above all else is a national housing policy” which should run for a period of 20 years at least and be agreed by all political parties.

“Public housing on a large scale including social housing and cost rental housing shouldn’t be related to the market and all that – it should just be provided at as low a cost as possible,” he said.

“Who is going to deliver it?” he asked. “ Would it be the private sector? No”.

Sinn Féin urged to take action over Stanley’s ‘glorification’ of IRA massacre 10:22
Some 5,300 people waiting over two years for Irish citizenship application to be processed 10:09
Man (30s) dies after being hit by car on M50 on Sunday night 08:43
Exiting Level 5: What will be allowed from December 1st? 08:26
Role of ‘survivor cannibalism’ during Great Famine detailed in new TV documentary 07:20