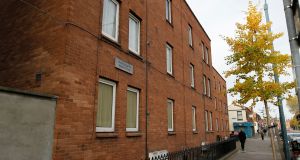 A housing charity has been moving students into a senior-citizen flat complex in Dublin’s north inner city, after asking elderly residents to move out so the building could be redeveloped.

The Catholic Housing Aid Society (Chas) is charging the students €800 a month for the one-bedroom flats in James McSweeney House on Berkeley Street, almost 3½ times the rent it secures for the elderly residents living in the complex.

James McSweeney House is a purpose-built senior-citizen complex of 21 apartments in three storeys constructed by Chas in the mid-1980s. Chas last month sought planning permission from Dublin City Council to demolish the block and build a new four-storey complex of 35 senior citizen apartments.

The council has yet to make a determination on the planning application, but Chas has begun moving tenants out of the complex in anticipation of a positive response. It has also begun moving international students into the vacated flats.

Chas chief executive Miceal McGovern said nine of the flats had so far been detenanted of their single elderly tenants, who had been replaced by 18 students.

“The elderly people have moved to our other properties, and we thought it would be daft to leave those apartments lying empty.”

Mr McGovern said he had offered the empty units to the city council for homeless people, but the council had said they were not suitable. “Our second option was to find tenants for them. We worked with an agency who brings in students on three-month English language courses, and rent the empty flats to them,” he said. “There are two students in each flat and they pay €800 a month.”

Chas had been receiving €238 a month for each of the elderly tenants in the complex.

Independent city councillor Mannix Flynn said Chas should not have moved tenants out of the complex when it did not have planning permission for the new development.