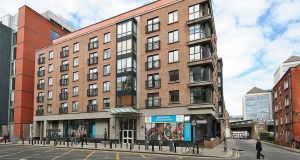 The National Transport Authority (NTA) has reaffirmed plans to acquire a public swimming pool and an apartment block in Dublin city centre to make way for the MetroLink rail line despite objections from city councillors.

The council earlier this month wrote to the NTA on foot of motions calling for the authority to reverse its plans to demolish the Markievicz Leisure Centre on Townsend Street and the College Gate apartment complex on Townsend Street.

The leisure centre was refurbished by the council two years ago at a cost of more than €1 million. The council has received representations from the local community which uses the pool, as well as residents of the 70 apartments above the leisure centre who want to stop the demolition of their homes.

Details of the preferred route of the €3 billion metro line which combines the previously planned Metro North from Swords to the city centre with an upgrade of the Luas Green line between Charlemont and Sandyford, were announced last March.

The route involves the use of Na Fianna GAA club and adjoining school pitches on Mobhi Road in Glasnevin for a major construction site, the closure of the through road linking Rathmines and Ranelagh at Dunville Avenue in south Dublin to remove a level crossing, and the demolition of the Townsend street block for the construction of an underground station.

Following representations from Taoiseach Leo Varadkar in relation to the GAA lands and Minister for Housing Eoghan Murphy over the Dunville Avenue closure, the NTA agreed to review the route.

In response to the letter from the council, NTA deputy chief executive Hugh Creegan said while it was still in the process of reviewing submissions in relation to the line, the route “does require the acquisition of the swimming pool and the block of apartments [approx 70] with all of the implications that arise from that”.

He said the need for the acquisition arose from the “intent to connect the MetroLink scheme to the Dart network at Tara Street”.

“It is worth noting that following construction of the station the above-ground space is still available for development,” he added.

Fianna Fáil TD Jim O’Callaghan said he was surprised by the NTA’s response given that a public consultation process was not completed.

“The letter from the NTA suggests that although they are actively considering submissions in respect of College Gate it seems to have already made up its mind that demolition of College Gate is necessary for its proposals, and that there will be no alterations.

“This raises a question as to whether there is in fact any real public consultation process, and what effect, if any, public submissions can have on the NTA’s proposals.

Independent councillor Mannix Flynn said the NTA was pre-empting the outcome of its own process. “The NTA are jumping the gun here. The residents here don’t have the weight of the GAA behind them, so their concerns are disregarded. The NTA has made it clear that the demolition is already in the bag.”

Owner-occupiers, tenants and landlords at the apartment complex have formed the Save College Gate group in an attempt to prevent the demolition of their homes. The group said there were alternative sites available in the area which could be used for construction of the underground station, including the site of the recently demolished Apollo House on Tara Street.