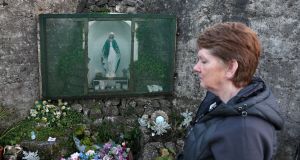 Galway historian Catherine Corless said she was “shocked...pleasantly shocked” by the Government’s decision to initiate excavation and exhumation at the site of the former Bon Secours Mother and Baby Home in Tuam.

Ms Corless, who received an honorary doctorate from NUI Galway this month for her “meticulous and painstakingly precise” research, said she had been given no inkling of the decision when she met Taoiseach Leo Varadkar on Monday night.

“He told us that Minister Zappone was bringing a memo to Cabinet, and he couldn’t give an indication as to what way it would go, and so we went home, and then I first heard of the good news in a call from the BBC in Belfast, ” she said.

Accompanied by her husband Aidan, who fielded calls all afternoon on her behalf, Ms Corless joined several survivors of the home, including Carmel Larkin, at the site.

An expert group which had reported to Ms Zappone had outlined five options, ranging from erecting a memorial there to full exhumation of the site, and this “option five” was one which Ms Corless said she hoped for – but feared would not come to pass.

“It is tremendous, for the survivors, for the relatives of those who still don’t know what happened to their siblings, and for all those people who have carried a stigma all their lives for being born out of wedlock,” she said. “This is recognising those who lived and those who died.”

Ms Corless had paid €4 for each of the 796 death certificates she obtained from local authority files between 2011 and 2013, with causes of death for children from infants upwards listed as pneumonia, malnutrition, measles, tuberculosis and other conditions.

Test excavations by the Commission of Investigation into Mother and Baby Homes confirmed in March 2017 that there were juvenile human remains in “significant quantities” on the grounds of the former home at Tuam.

Ms Corless was not able to find burial sites to match most of the death certificates, and stresses this is why there has to be a complete investigation. A Health Service Executive memo in 2012 had signalled possible interference with birth and death certification at mother and baby homes in Tuam, Co Galway, and in Cork.

The HSE memo had noted how deaths recorded at the Bessboro mother and baby home in Cork had dropped dramatically in 1950 with the introduction of adoption legislation.

“The mother and baby home in Tuam was similarly involved with the provision of babies to the American adoptive market,” the HSE memo said, and “there are letters from senior church authorities asking for babies to be identified” for the US.

“We know there were burials on the grounds, and from 1937 they moved to an area where there are sewage tanks,” Ms Corless said. “Now maybe we can establish the facts.”

“The commission’s geophysical survey gives a fair idea of where there would be burials, so this does not have to be intrusive,” she said.

“It won’t affect much of the playground and it won’t affect any of the houses subsequently built by Galway Co Council. And the fact that so many people in Tuam came out for our vigil on the day of the Pope’s visit to Knock in August meant that a majority know how important this is....”

Details of how the site will be excavated and who will carry out the work are yet to be outlined.