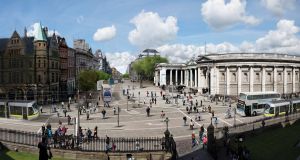 College Green’s proposed changes: now a thing of the past as buses need to pass in front of Trinity College Dublin. Photograph: Dublin City Council/PA

The denouement of the College Green plaza saga has turned out to be a complete farce – not the An Bord Pleanála ruling itself, but the disastrous process which lead to that ruling.

In the preamble to its decision, the board conceded Dublin City Council’s proposal would produce a “quality public realm” that would “significantly enhance the amenity and attractiveness of this city centre location”.

It would also “significantly improve the visual amenities of the area and would facilitate improved appreciation of the architectural and cultural heritage of this important site”.

Which sounds like the board was all for the development.

And then comes the “but”.

It said that while the principle of the development was acceptable, it would not give permission because of the traffic implications for the city, particularly on buses which would be shunted out of Dame Street and down on to the city quays.

The row over what to do with these buses dominated the three-week planning hearing, which had initially been scheduled to run for three days, last April.

But it should never have come to this. The issue should have been resolved, not during the process, nor in the months after the council made its May 2017 application to the board, or even in the two years before that when it was preparing its plans for the plaza.

It should have been resolved a decade or more ago when plans for the new Luas line, joining up the Green and Red lines through College Green, were being made.

The new Luas line got its permission six years ago and was under construction for three years before it began operating last December, so even when the most unobservant passerby could not help but notice there was something major coming down the tracks through the centre of the city, the issue of what to do with College Green was allowed to just trundle on.

For many years before planning permission was granted, the prospect of the cross-city Luas has been hurtling towards the city. It is not that nobody realised. About 11 years ago, the now-defunct Dublin Transportation Office, following two years of negotiations with the Railway Procurement Agency, Dublin City Council and Dublin Bus, proposed banning cars from driving through the core of Dublin city centre, from Christ Church Cathedral via College Green to O’Connell Street, in anticipation of the Luas.

This resulted in the “bus gate”, which was initially a total car ban that watered down to peak-time restrictions once implemented.

But it was only in September 2015, that the then executive manager of the council’s traffic department, Declan Wallace, said College Green traffic changes needed to be agreed “urgently” because the Luas was on the way. This was followed two months later by council chief executive Owen Keegan saying bus usage of College Green would have to be restricted.

In April 2016, Dublin Bus appeared to have come on board with the plaza plans, albeit reluctantly, before a volte face the following year when the plans were lodged, deciding they were “socially regressive” because the council no longer proposed running buses both directions on Parliament Street.

The National Transport Authority initially supported Dublin Bus on the Parliament Street issue, before reversing at the end of the planning hearing to back the council instead.

Which may have given the impression the game was up for Dublin Bus, but not so. The board has finally accepted its arguments, meaning victory to Dublin Bus, at the expense of the civic plaza and many, many wasted years.