Ireland votes as one to remove blasphemy from Constitution

‘Ireland is rightly proud of our reputation as a modern, liberal society,’ says Flanagan 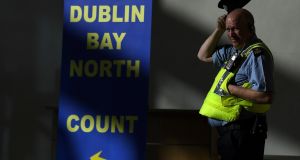 In all the Dublin constituencies the Yes vote was over 70 per cent. Photograph: Clodagh Kilcoyne/Reuters

Every single one of the 40 constituencies in Ireland voted to remove the word “blasphemous” from article 40.6.1 of the Constitution in a unanimity unique in recent Irish referendums.

Last Friday’s vote was closest in constituencies along the Wild Atlantic Way. In Donegal 51.5 per cent voted Yes to 48.4 per cent No, while those in Sligo-Leitrim voted 56.1 per cent to 43.9 per cent to change the Constitution.

Meanwhile, voters in Mayo voted by 56.9 per cent to 43.07 per cent; though the heavily urbanised Galway West constituency was an outlier where 65.8 per cent voted Yes and 34.1 per cent voted No.

Last May Donegal was the only constituency to reject removal of the Eighth Amendment from the Constitution in the abortion referendum, and in May 2015 Roscommon-South Leitrim was alone in voting No to same-sex marriage.

On the east coast, Yes tended to do better overall, with 72.7 per cent in Kildare North, for instance, the highest Yes vote outside Dublin.

Welcoming the result, Minister for Justice Charlie Flanagan said it had always been his view “that there is no room for a provision such as this in our Constitution”.

He said: “Ireland is rightly proud of our reputation as a modern, liberal society. The world has watched in recent years as we have taken landmark decisions as a people to change our Constitution with regard to some of the deepest personal matters when we voted Yes to marriage equality and to repealing the Eighth Amendment.”

He added: “We have again sent a message to the world, a strong message that laws against blasphemy do not reflect Irish values and that we do not believe such laws should exist.”

In a brief statement the Catholic bishops stressed, now that the offence of blasphemy had been removed from the Constitution, that “it is vital to ensure that the rights of individuals and communities to practise and live out their faith openly are protected by our law”.

The promotion of “freedom of religion, and the freedom of conscience – for all in society – greatly enriches the social fabric of a country, and is one aspect of respect for the dignity of human persons,” they said.

Bishop Kenneth Kearon, chairman of the Church of Ireland’s Church and Society Commission, welcomed the result but regretted “that we didn’t take the opportunity to take a lead within the international community by replacing it with a provision protecting freedom of thought, conscience and expression, including protection from hate speech; rights that are under threat or not available in many parts of the world”.

In a November 2013 joint statement, all the main churches in Ireland had described the blasphemy provision in the Constitution as “largely obsolete”.

Atheist Ireland also welcomed what it described as removal of the “medieval crime of blasphemy” from the Constitution. Chairman Michael Nugent said it followed “a decade of campaigning by Atheist Ireland to have this referendum held”.

The two-to-one margin was “a great result for freedom of religion, belief, and speech, and for Irish politics based on integrity instead of nods and winks,” he said.

Welcoming the result, Amnesty International Ireland said it was “another important step towards a human-rights-compliant Constitution”.

“Now, States like Pakistan can no longer justify their own severe anti-blasphemy laws by pointing to Ireland’s Constitution,” said executive director Colm O’Gorman.

But he also called on the Government to “ensure that everyone can manifest and practise their religion without discrimination or threat. We also need to have robust prohibition of inciting hatred on religious and other grounds, in law and practice.”

The result was “another significant milestone for Ireland in becoming a modern, secular and more compassionate society,” said Noeleen Hartigan, chief executive of the Humanist Association of Ireland. “Our past should not prescribe our future, and the laws and practices which give one faith system dominance over people’s lives must be dismantled,” she said.