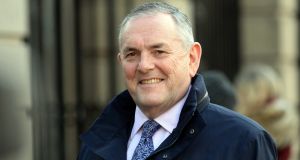 A Bill to create a so-called “friendly vulture fund” will be brought to the Fianna Fáil parliamentary party at its meeting on Wednesday.

Carlow-Kilkenny TD John McGuinness will present the National Housing Co-Op Bill, which will provide for the establishment of a statutory “provident society” to buy up distressed mortgages from banks and let the homes back to the occupiers, in an arrangement to be known as “mortgage to rent and mortgage”.

Mr McGuinness said such an organisation would be “off balance sheet”, that is, it would not cost the exchequer anything and would occupy the role currently being filled by “vulture funds”. Like them, it would buy mortgages at a write-down.

Only homeowners who cannot pay their mortgage for reasons beyond their control will be eligible for the scheme. They would become tenants of the co-op with an option to buy the dwelling back at any time during the lifetime of the original mortgage, at the price the co-op paid for it plus interest.

In the case of buy-to-lets, the Bill envisages tenants remaining on in their home and becoming tenants of the national housing co-op.

“If we don’t do something to stop these vulture funds buying all the distressed mortgages, as a country we are going to end up in a terrible situation,” said Mr McGuinness. “Everyone is looking for a solution to the problem of these funds, and the flow of families in arrears, into homelessness, but all that’s being offered is tinkering around the edges. The time has come to take a bold step.”

He said such a model had the added advantage of keeping the repayments or rent paid by the household within the State, rather than transferred to funds outside the country.

The Bill, which has had input from the Master of the High Court, Edmund Honohan, homelessness campaigner Fr Peter McVerry and former nonexecutive director of Bank of Ireland Pat O’Sullivan, is an initiative of the Right2Homes organisation, which describes itself as a not-for-profit organisation “committed to supporting legal initiatives aimed at preventing bank repossessions of family homes throughout Ireland”.

It is also understood to address concerns raised by a number of people, including Mr Honohan, that repossession orders are being granted in the Circuit Court without reference to EU Law, in particular the EU Charter of Fundamental Rights. The Bill is understood to state no repossession order can be granted to a bank without the court having first reviewed the court file, on motion, to the defendant, and having considered the proportionality of granting the order.

If Fianna Fáil backs the Bill, a presentation on its provisions to Oireachtas members would be arranged, said Mr McGuinness. It would then go to the Oireachtas Committee on Finances, Public Expenditure and Reform, which is chaired by Mr McGuinness.

Among those behind the Right2Homes initiative is businessman Brian Reilly. In December he brought the occupation of vacant office block Apollo House by housing activists to the attention of his colleague, US buinessman Ken Peterson. Mr Peterson offered €7.5 million to buy Apollo House so it could be kept to house homeless people. The offer was not taken up.