Dubliner, who was Protestant, declared ‘Blessed’ by Catholic Church 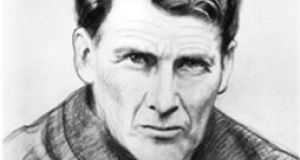 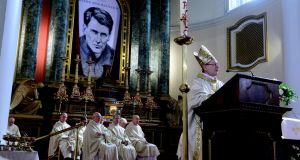 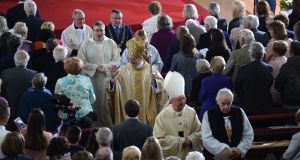 It should not happen in Ireland and certainly not in a year which commemorates the beginnings of the Reformation 500 years ago, when Martin Luther nailed his Ninety five Theses to the door of All Saint’s church in Wittenberg.

The beatification of Jesuit priest Fr John Sullivan at the St Francis Xavier church on Dublin’s Gardiner Street Saturday morning is at once a tribute to the cordinal relations among churches in the city but also to the distance Rome itself has travelled ecumenically these recent years.

Nurtured and formed in the Church of Ireland, Dubliner Fr Sullivan converted to Catholicism at 35 and died a Jesuit priest in 1933 at the age of 71. From a privileged background - his father was Lord Chancellor of Ireland - he attended Portora Royal School near Enniskillen and Trinity College Dublin.

In 1896 he converted to Catholicism and was ordained a Jesuit priest 11 years later. He joined the teaching staff at Clongowes Wood college, where he remained until his death.

Known for his life of prayer and work with the poor, even while alive he had such a reputation for holiness that in 1928 he was believed responsible for curing a three year old nephew of Michael Collins (of the same name) who sufferedfrom infantile paralysis. There have been claims of many other miracles too.

His beatification on Saturday follows formal recognition of the miraculous recovery from cancer of Drumcondra woman Delia Farnham in 1953 through Fr Sullivan’s intervention.

As miraculous has been the Vatican’s journey ecumenically to this event since its Dominus Iesus document was published in the year 2000. Then when Pope Emeritus Benedict XVI was s Prefect at the Vatican’s Congregation for the Doctrine of the Faith.

Dominus Iesus described Anglican and Protestant churches as not churches “in the proper sense.” Rather they were, it said, “ecclesial communities which have not preserved the valid Episcopate (their bishops are not real bishops) and the genuine and integral substance of the Eucharistic Mystery (their Communion is not real Communion).”

The then Cardinal Ratzinger also advised Catholic bishops not to refer to such Protestant and Anglican “ecclesial communities” as “sister churches.”

And Pope Francis came along. In April of last year he approved the decree that authenticated the Delia Farnham miracle attributed to Fr Sullivan, paving the way for this morning’s beatification.

Last October, he went to Sweden to mark the beginnings of Reformation 500 commemorations at Lund, where a joint Catholic - Lutheran statement was issued stating: “we have learned that what unites us is greater than what divides us.”

Irish Jesuit Fr Conor Harper, vice-postulator for the cause of Fr Sullivan over the past 34 years, described the beatification of this “half Protestant/half Catholic” this 500th year of the Reformation as “coincindental, but also providential.”

He recalled how the late Church of Ireland primate Archbishop George Otto Simms, “a keen supporter of the beatification of Fr Sullivan”, used say “never forget his holiness was learned in our tradition and you (Catholic Church) got the benefit of that solid foundation.”

Such “solid foundation” will be acknowledged in concrete fashion at Saturday’s ceremony when the ritual formal request for beatification will be publicly made by both the Church of Ireland Archbishop of Dublin Michael Jackson and the Catholic Archbishop of Dublin Diarmuid Martin, together.

Principal celebrant and homilist, representing Pope Francis at the ceremony, will be Cardinal Angelo Amato, Prefect of the Congregation for the Causes of Saints.

Back in 2000 Cardinal Amato was consultor at the Congregation for the Doctrine of the Faith. As Dom Angelo Amato at the press conference to launch Dominus Iesus on September 5th that year he said it was intended to reiterate the faith of the Church “against ambiguous and erroneous assumptions.”

There was he said “nothing new” in it, “merely we have thrown more light on the issues.” Since when, it would appear, the glare has abated sufficiently to allow for “a half-Protestant” to be cast among the Catholic “Blessed”.

Also expected are members of Fr Sullivan’s family as well as representatives from Portora Royal School and Trinity College Dublin. There are no known relatives of Delia Farnham surviving.

The ceremony, which begins at 11am, will be streamed live on the Irish Jesuit website www.jesuit.ie/beatification