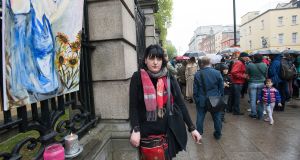 A vigil outside the Dáil on Friday for Dara Quigley. Pictured is her friend Dolly Murphy with her painted impression of Dara. Photograph: Dave Meehan

The office of the Data Protection Commissioner has said it is examining the leaking of Garda footage of the late journalist and blogger Dara Quigley.

A spokeswoman for the commissioner said it had been alerted by An Garda Síochána of the footage and “we’re at the stage of looking into it now”.

She said the commissioner would regard it as a serious data breach if it found that footage of a vulnerable women had been leaked by a garda.

Ms Quigley (36) took her own life on April 12th, five days after she had been detained by gardaí under the Mental Health Act. She had been walking naked in a Dublin street when detained.

A Garda CCTV video of her detention was posted on Facebook shortly before her death.

Tánaiste and Minister for Justice Frances Fitzgerald has said a Garda investigation and a Garda Síochána Ombudsman Commission inquiry into the events surrounding Ms Quigley have begun.

A vigil organised by Ms Quigley’s family was held outside Leinster House on Friday evening to demand better services for people struggling with mental-health problems.

“What we’ve seen over the last few days has been quite horrific. I think there’s a lot of people here who need a bit of help to get them through the next period of time,” the Dublin South Central TD said.

“I hope that . . . we can work together, respectfully, in unity and that we hold the people to account who did this.”

Carol Moore, of Dual Diagnosis Ireland, said Ms Quigley “made people think” and “had a positive impact on so many people’s lives”.

The organisation was set up in 2008 to raise awareness of the lack of services for those suffering from mental-health problems and substance addiction simultaneously.

“In the same way we as a society have accepted locking single pregnant women away in Magdalene homes is wrong, we need to accept that people with addictions need compassion and acceptance, not rejection and shaming, as Dara suffered,” Ms Moore said.

“But it is not right to solely blame healthcare professionals who are themselves overworked, overstressed and increasingly suffering from mental health problems themselves.

“We need to look further for the solution and to stop more Daras dying because of poor services.”