First beatification in Ireland puts Jesuit a step from sainthood 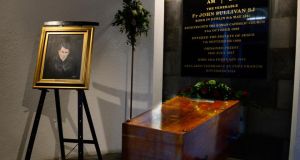 The tomb of Fr John O’Sullivan SJ during his beatification at St Francis Xavier’s church on Gardiner Street in Dublin. Photograph: Cyril Byrne 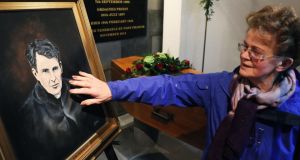 A member of the congregation pays her respects to Fr John Sullivan in St Francis Xavier’s church in Dublin following the first beatification in Ireland. Photograph: Brian Lawless/PA Wire

There were wristbands, portaloos and even merchandise on sale on Dublin’s Gardiner Street at the weekend.

However, this wasn’t some inner-city music festival – rather it was the Ireland’s first beatification ceremony, a event which brought the late Jesuit priest and teacher Fr John Sullivan a step closer to sainthood.

It was an impressive operation. At least four video cameras were dotted around St Francis Xavier’s church, the altar of which was adorned with a massive banner depicting Fr Sullivan. The event on Saturday was even livestreamed on the Jesuits’ Irish website.

The faithful packed into the church for the ceremony. Those unable to find a seat had to find room in the two large overflow tents outside where they could watch proceedings on widescreen televisions, accompanied by a live commentary.

Fr Sullivan’s remains are kept at a shrine in the church. After the ceremony, the shrine was opened to allow worshippers file past and touch his coffin.

The event was fittingly ecumenical, with Cardinal Angelo Amato representing Pope Francis, and Catholic Archbishop of Dublin Diarmuid Martin joined by Church of Ireland Archbishop for Dublin Michael Jackson on the altar.

The road to sainthood is lengthy and complex – Fr Sullivan died in 1933. In 1960 he was declared a “servant of God” by the authorities in Rome, in 2014 he was declared “venerable” and on Saturday he was elevated to “blessed”.

Known for his life of prayer and work with the poor, even while alive he had such a reputation for holiness that in 1928 he was believed responsible for curing a three-year-old nephew of Michael Collins (of the same name) who suffered from infantile paralysis. There have been claims of many other miracles too.

Recently, the pope formally recognised as a miracle the recovery of Drumcondra woman Delia Farnham from cancer in 1953 through Fr Sullivan’s intervention, clearing the way for his beatification.

Fr Sullivan still needs another miracle after Saturday’s ceremony in order to be considered for sainthood. This would show he is “considered as a saint in heaven and for the whole church”, according to general postulator for the Jesuits, Toni Witwer.

As well as being the first beatification in Ireland, the ceremony had an extra significance in that it was celebrated by both Catholic and Church of Ireland clergy. Fr Sullivan converted from Church of Ireland when he was 35 and was ordained a priest 11 years later.

“I believe this beatification will lead to ever-closer collaboration between our two churches,” Dr Jackson said. It was not lost on all of the worshippers that the ceremony was occurring exactly 500 years since Martin Luther broke from the Catholic faith.

Fr Sullivan was remembered by Cardinal Amato as a simple, reserved man who “did not have the opportunity to perform great deeds”.

Instead he held a reputation as a compassionate teacher in Clongowes Wood college in Kildare. He is remembered for walking and cycling around the nearby villages to visit the sick.

The cardinal told worshippers of some of his community work, including bringing communion to a disabled woman every day for many years.

During the ceremony, one of Fr Sullivan’s last surviving relatives presented a lock of the priest’s hair before the formal request for beatification was made.

One of the final speakers was Irish Jesuit provincial Fr Leonard Moloney, who said he prayed that “other young men would heed the call and follow in John Sullivan’s footsteps as Jesuits”.