Change ‘essential’ if young women are to be attracted into politics, they say 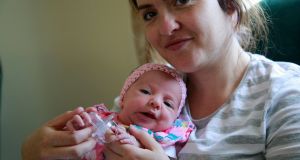 People Before Profit’s Hazel de Nortúin and her daughter Zara at their home. Photograph: Nick Bradshaw

Three Dublin city councillors, who recently had to return to work within weeks of giving birth want to see the introduction of paid maternity leave for councillors.

In addition to paid leave, they are seeking the right to nominate a paid substitute for their seat for a period of up to six months.

This is “essential” if young women are to be attracted into politics, they say. They are backed by the National Women’s Council of Ireland, which adds that local politics is the route for many into national politics. The organisation is calling for similar provisions for female TDs, describing the absence of paid maternity leave in politics as “discrimination”.

Cllr de Nortúin, a councillor for Ballyfermot-Drimnagh, had a baby girl, Zara, on April 25th and was back in the council chamber on May 8th. She was “shocked” when she heard she would have no maternity leave.

Councillors are paid a basic allowance of €16,645 per year and must attend 80 per cent of council and committee meetings to get expenses.

“For me the expenses bring my income up to about €22,000. I pay rent and have another son. We need to survive,” said Cllr de Nortúin.

Asked about going back to work after just two weeks, she said: “It was very hard. I was breastfeeding and had to move Zara on to bottles a few days before. I was pumping all day to leave her a feed, and trying to read. I was tired. In the meeting I was checking my phone to see if she was all right.”

As well as the monthly council meeting, she sits on three committees. She would not attend a meeting just to be marked present.

“I love my work , but a few months to recover would be great.”

If men had babies

Cllr Boylan, who represents the northwest inner-city and had her son, Bródy, on March 19th, was back at work on May 8th.

“It was awful leaving him. I was gone six hours. In one way you just want to be with your new baby, but the work is important and you have to give it full attention.”

Cllr Byrne, who represents Pembroke-South Dock, had her son, Arlo, on June 13th last year, and was back two weeks later for a local area development meeting. Describing herself as “lucky” as she has another job from which she took paid leave, she nonetheless says: “We have no formal maternity leave as councillors. It’s something that needs to be looked at.”

Councillors are not employees of their local authority but are technically self-employed, and get allowances and expenses set by the Department of Housing.

Since March, they can claim maternity benefit of €235 a week from the Department of Social Protection. This would mean a cut in income.

However, it would also mean leaving the seat vacant, their vote at meetings unused and constituents’ case case work ignored – things the three councillors would not countenance.

A Department of Housing spokesman said that while councillors can take up to six months off – “either on health grounds or for another reason in good faith” – and still get their allowance, they will not get their expenses.

In addition, they cannot co-opt a substitute without resigning their seat.

Orla O’Connor, director of the Women’s Council, said this was “clear discrimination” against women, while Cllr de Nortúin wondered: “If it was men who had babies, would we be having this conversation at all?”