‘I seen the Blessed Virgin... on the church gable’: John Curry’s testimony lifted him from the ordinary 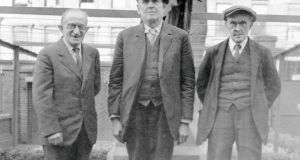 In an undated photo, John Curry, centre, with Patrick Hill, right, his cousin and fellow witness to the Apparition at Knock, and an unidentified friend. Photograph: Knock Shrine via The New York Times 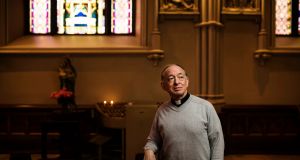 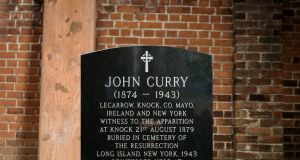 A new headstone for the grave of John Curry, an Irish immigrant laborer who died in 1943, reburied at the Basilica of St. Patrick’s Old Cathedral in Little Italy, in New York on Saturday. Photograph: Karsten Moran/The New York Times 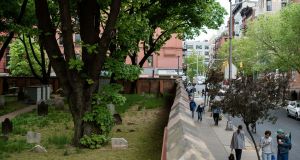 The letter delivered by hand to the Home for the Aged of the Little Sisters of the Poor commanded one of its residents - a John Curry - to appear before a tribunal of the Roman Catholic Archdiocese of New York. Refusal could lead to “ecclesiastical penalties”, a phrase conjuring eternal discomfort.

The retired labourer obeyed. Entering the archdiocesan offices in Midtown, he left behind the thoroughly modern New York of July 1937 and returned to the remote Co Mayo village of Knock. To one day in 1879, when he was five, a day he said he remembered as well as last night.

“Are you the John Curry who is mentioned as having been an eyewitness to the alleged apparition of the Blessed Virgin at Knock Church on that date?” a priest asked.

The witness interrupted to make at least one thing clear: “Yes, sir, I am the very John Curry.”

It is precisely because he was the very that John Curry is now of the moment. He was recently disinterred from a Long Island cemetery in order to be reinterred Saturday in choice Manhattan clay: the small cemetery of the Basilica of St Patrick’s Old Cathedral in Little Italy.

His prominent headstone is planted, his lifelong distinction chiselled in the blue-black granite: “Witness to the Apparition at Knock.”

What you choose to believe is up to you. This is merely the story of an Irish immigrant who died without means in Gotham obscurity, then rose to such postlife prominence that, amid considerable pageantry, the archbishop of New York, Cardinal Timothy M. Dolan, celebrated his requiem Mass on Saturday and prayed over his new earthly home.

The Knock of 1879 was an out-of-the-way village, not long recovered from the Great Famine. On the evening of August 21st, with the rain lashing, 15 villagers claimed to see holy apparitions on the side of the Catholic Church, suddenly aglow. In the centre appeared the Virgin Mary, her eyes trained heavenward, and, by her side, St. Joseph and St. John the Evangelist. The images neither moved nor spoke.

The oldest witness was a woman of about 74; the youngest was a child, John Curry. The boy had been lifted up by an 11-year-old cousin so he could see over a wall and admire what he called the “grand babies” of an apparition that was said to last two hours.

Word of “strange occurrences” in the Irish countryside spread. Before long, the local bishop had established a Commission of Enquiry, which described its questioning of young Curry this way: “The child says he saw images, beautiful images, the Blessed Virgin and St. Joseph. He could state no more than that he saw the fine images and the light, and heard the people talk of them, and went upon the wall to see the nice things and the lights.”

The commission concluded that the testimony was, on the whole, “trustworthy and satisfactory.” Pilgrims flocked, miracles were attributed, and Knock became sacred ground, a place of veneration. Eugene Hynes, a sociologist and author of “Knock: The Virgin’s Apparition in Nineteenth-Century Ireland,” described the supposed apparition as a way of criticizing clergy members who did not support the peasants chafing against British occupation.

“Having the Virgin Mary appear is a way of saying that God is on our side, no matter what the authorities say, even if they are priests or bishops,” Hynes said.

Hynes, who visited Knock while growing up in Co Galway, says that stories like this have multiple layers of meaning. “I try to get people to see that the world is not just a simple yes-no prospect,” he said. “It’s not just what exists and what does not exist.”

But John C. Cavadini, a longtime professor of theology at the University of Notre Dame, is an unabashed believer in Knock who finds particular meaning in its quiet simplicity. No movement, no sound. Just an unhurried apparition before a small group of marginalised people, in the middle of nowhere.

“A moment of solidarity, of accompaniment,” Cavadini said. “The Irish people have suffered, and we’re going to be out here in the rain with you for a while.”

The years came and went like the pilgrims to the shrine. Curry grew up and left Knock in search of work. According to a short biography written in 2009 by an Irishman of the same name (who identifies himself as Grandnephew of the Visionary), the young man eventually settled in New York, where he became an attendant at City Hospital on Welfare Island, now known as Roosevelt Island. A cousin who visited Curry later remembered him as a “good respectable little man,” with an undiluted brogue and a fondness for telling stories about the Knock of his youth.

In 1932, when he was about 58, the single Curry moved into a home for the older indigent run by the Little Sisters of the Poor at 213 E. 70th St. He helped with daily Mass and cleaned the dining room. He was also “very candid,” one of the sisters later wrote. “If he done anything wrong, he was the first one to tell you about it.”

After a few years, one of the sisters asked if he was from Co Mayo and, if so, had he ever heard of Knock? Yes and yes, he answered. She then asked whether he knew the John Curry from Knock.

“I said yes,” he later recalled in a letter. “He is the J. Curry that serves mass for you in the Home every morning ...”

Then came that ecclesiastical summons in 1937, requiring Curry’s presence in the old O.H.P. Belmont mansion at 477 Madison Ave., then occupied by the archdiocese. Three “reverend judges,” representing a second Commission of Enquiry in Ireland, asked various questions that elicited extraordinary answers, including: “I seen the Blessed Virgin, St. Joseph and St. John the Evangelist on the gable of the church.”

Curry went into much deeper detail than he had when questioned as a boy a half-century earlier. He said he had seen an altar and a lamb, although he could not recall whether the lamb had been on the altar or in St. Joseph’s arms. St. Joseph had whiskers, he said, and St. John held a book. He also acknowledged having read the statements of two other witnesses just before coming into the hearing, but said: “What I gave you here was out of my head and not out of any book.”

When asked whether he had anything else to add, Curry said: “I have never been sick a day in my life. I have a great memory. Sister can tell you that. The only time I paid a doctor was to have a tooth pulled.”

The retired Irish labourer was then excused to melt back into the bustling Manhattan blur. He died in 1943 at 68, the last “official visionary” of Knock, and was buried without a headstone in a communal cemetery plot owned by the Little Sisters of the Poor in Farmingdale, on Long Island. Soon gone, too, were the home for the aged, the O.H.P. Belmont mansion and City Hospital.

But Knock lives on, thriving on what was said to have occurred in 1879. A continuing stream of pilgrims flows into a basilica, a shrine, a museum, the daily Masses and confessions, a campground, and a village chockablock with religious gift shops.

In summer 2015, Dolan and 180 other pilgrims from New York landed at Knock’s international airport, which opened three decades ago. During his visit he met the local rector, Fr Richard Gibbons, who informed him that the last Knock visionary was buried in an unmarked grave on Long Island. So began plans to disinter and reinter.

Among those involved in the planning of Saturday’s Mass was Monsignor Donald Sakano (72) pastor of the Basilica of St Patrick’s Old Cathedral, at Mott and Prince streets in New York.

To demonstrate, Sakano walked down to the catacombs beneath the 200-year-old church and opened the heavy black door to one of the crypts, revealing a dark-wood coffin freshly removed from Long Island soil. Then back upstairs and out to the cemetery he went, to point out the headstone awaiting its purpose.

Central to the beauty of the story, the monsignor said, was the fact that Curry was an ordinary man of no worldly accomplishment.

“There’s hope for all of us ordinary people.”

Here, then, at Old St Patrick’s Cathedral, New York, now rests an Irish immigrant, day labourer, hospital attendant and daily communicant who saw something when he was a boy of five. John Curry. The Very.