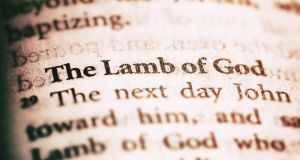 “I cannot read Sunday’s gospel passage without hearing in my mind the short panoramic chorus from Handel’s Messiah: ‘Behold the Lamb of God that taketh away the sin of the world’: the words repeated over and over, a sweeping sense of movement but the rhythm a little jerky and uneven, like scrambling across rock” Photograph: iStock

‘Here he is, God’s Passover lamb! He forgives the sins of the world!”, yells John the Baptist to his friends as he watches Jesus approach from across the plain. There is such drama in this little scene. I imagine Jesus as a speck in the distance, slowly coming into focus. Maybe it was the late afternoon and the light was softening. John was with his gang, Jesus with his, but there was no hostility, competition or power-play; just a deep sense of occasion, an intense mutual recognition between cousins.

I cannot read Sunday’s gospel passage without hearing in my mind the short panoramic chorus from Handel’s Messiah: “Behold the Lamb of God that taketh away the sin of the world”: the words repeated over and over, a sweeping sense of movement but the rhythm a little jerky and uneven, like scrambling across rock . . . I find myself thinking that Jesus may well have been very beautiful (God’s second Adam – why wouldn’t he have been?), fit (a carpenter), in his physical and mental prime at 30 years old. This scene reminds us that Jesus was a man of flesh and blood and bone whose time had come; launching himself onto his world.

The article was called “The apostle Paul and the introspective conscience of the West”. The thrust of the article was that our view of sin in the Western church and in Western culture is very personal and individualised. When Paul wrote about sin, his notion of sin would have been very different from what we understand when we read his words today. Human nature does not change but our understanding of ourselves as human beings certainly does and this, of course, informs what we take from and bring to the Bible.

As Western Christians the notion of personal sin, confession and absolution, is familiar to us.

But our understanding is overwhelmingly offender-based. The assumption is that we are always the ones in the dock, the sinners, the prodigals.

There is a place for this, of course, but our understanding lacks balance.

It contrasts with the stance of the Psalmist who so often proclaims, with complete, innocent certainty, that God is for him and against his enemies. His enemies are the ones with power so naturally God will be on his side!

But what happens when we are the ones who have been sinned against? We know that being sinned against often leads to feelings of shame. Think of a person who has survived rape, or someone who is too poor to feed their children.

Behold the Lamb of God, who takes away the sin of the world.

I find myself thinking of the fruitful emphasis of the discipline of restorative justice, which is firmly victim-centred and committed first and foremost to making space for the harmed person to express their pain and ask their questions.

The restorative approach attends primarily to the voice and the needs of the victim yet (as a magnificent byproduct) honours the perpetrator by giving them to opportunity to face up to what they have done and seek to made amends. Everything about this has the fragrance of the Kingdom of God.

We have important work to do in our liturgy in presenting sin in both its facets, and I feel that the restorative approach could bring a new freedom. Both our own sin and the sin that has been committed against us lead to shame and burdening and captivity and death. Until forgiveness means both being freed from our own sin and from the effects of others’ sin, our churches will not meet the felt needs of many souls.

It strikes me that the Agnus Dei which we pray three times just before we receive the bread and wine – “Lamb of God who takes away the sin of the world” – fuses perfectly both these aspects of sin.

Lamb of God, who takes away the sin of the world, have mercy on us, and grant us peace.