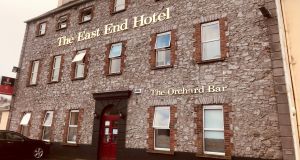 The Department of Justice approved the placement of 10 beds in one room in a hotel at the centre of a controversy over the alleged overcrowding of asylum seekers.

At the weekend, the department dismissed a video of a room in the East End Hotel in Portarlington with 10 beds in it as “staged”. However, it confirmed last night that it had approved a similar arrangement in a separate room in the same hotel.

The department defended its decision to approve the 10-bed room, saying it was large enough to conform to minimum standards as laid out in the 1966 Housing Act, which stipulates the minimum space per person should be 400 cubic feet.

“This room is in excess of 4,000 cubic feet,” the spokesman said, adding that the room it approved had two windows, whereas the one in the allegedly staged video had none. The room was not fully occupied, with a maximum of eight people sleeping in it at any one time. Currently, no more than six people per room are accommodated in the hotel.

However, advocacy groups sharply criticised the placement of asylum seekers in a room with 10 beds in it. Nick Henderson, chief executive of the Irish Refugee Council, said “it is an indictment on our asylum system if we are defending the accommodation of eight people in one room on the grounds that it is permitted under the minimum space requirements of the Housing Act”.

“People in the asylum system are in a vulnerable situation and may come from a background of trauma. Privacy is essential,” he said.

He said the protection of the privacy of people in the asylum process was “paramount”. “However, in situations when many people are being accommodated in a single room that is near-impossible.”

Footage taken in the East End Hotel in Portarlington and circulated online at the weekend prompted widespread criticism of the conditions in emergency direct provision centres. Minister for Justice Charlie Flanagan tweeted he was “concerned at the content of this video clip”, and that he had sought a report on the matter.

However, the department later released a statement saying the video “does not represent the reality at this facility” and that hotel management claimed a number of residents had moved themselves from their rooms into the room in the video.

“The footage circulating appears to have been staged,” the department said on Saturday.

In a statement last night, the Movement of Asylum Seekers in Ireland rejected the suggestion the video was staged.

“We are appalled by the conduct of both the Department of Justice and Equality and the management in the East End Hotel who claimed that the 10 beds in the room were staged by the asylum seekers.”

Masi said it had reported the matter to the local fire officer and would write to the ombudsman seeking an independent investigation into overcrowding in emergency accommodation and direct provision centres.

“We are deeply concerned by the uncaring attitude displayed by the Department of Justice and Equality in the handling of this matter.”

Masi and residents in the East End Hotel have consistently made allegations about overcrowding there. Images and videos showing up to 10 beds in a room first appeared last August, and again in October. The department sent officials to investigate conditions in the hotel, and said it found that room size and occupancy is compliant with building regulations.

Following this, residents were told that to make videos or take pictures would be a violation of strict European data privacy laws known as the General Data Protection Regulation (GDPR). However, privacy experts said there was no legal basis for invoking GDPR in this instance.

“The core purpose of the GDPR is to give effect to the protection of fundamental human rights, not to act as a method for companies to keep conditions human beings are living in a secret,” said Simon McGarr, a data and privacy lawyer with McGarr Solicitors.