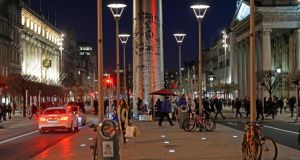 The Spire and the pedestrian island at night in O’Connell street . File photograph: Eric Luke / The Irish Times

An 81-year-old woman was found by a homeless volunteer near Dublin’s GPO Thursday night after being discharged from hospital.

The woman was found, in a freezing and very distressed state, outside the GPO on O’Connell Street shortly after 9pm by the volunteer who runs a soup kitchen for the homeless every Thursday night.

The Irish woman, who is believed to be suffering with a mental health issue or is the victim of a domestic abuse situation, was found by Irene Cody Murphy who immediately alerted two homeless charity workers from the Simon Community.

It is understood that none of the three could contact emergency services and as a result contacted former Dublin Lord Mayor and inner city Independent councillor Christy Burke.

Cllr Burke revealed that he had just returned home after helping on a soup run with Ms Cody Murphy when he received her urgent call.

“I couldn’t believe what I was hearing from Irene when she telephoned me. In the more than 20 years that I’ve been volunteering with homeless charities never have I come across a case like this. If Irene hadn’t have found her I’ve no doubt this woman would have been found dead as a result of hypothermia.

“Imagine an elderly woman after just being discharged from an acute hospital roaming our capital’s streets?

“I’ve dealt with 12 and 13-year-olds who are homeless but never a woman of this age. We managed to confirm what the woman was saying was true and that she had indeed been discharged from an acute hospital.

“We were about to put her into a hotel thanks to an anonymous donation of €100 on Thursday night. But I managed to get Fran Devereux from Dublin City Council and he got to work straight away in trying to help.

“She kept saying that she didn’t want to go to a particular hostel which led us to believe that she has been suffering for some time and has been out on our streets way before being found like this.”

Cllr Burke confirmed that Mr Devereux managed to get the elderly lady, who had not taken any drugs or alcohol, was bright and composed despite being ill, into to a secure location however, officials were informed that she would have to be out of the premises by 10am today (Friday) by the manager.

“Dublin City Council have now brokered an arrangement with management at the premises that the elderly lady can stay there until it is ascertained what her exact circumstances are ascertained,” he said.