Direct provision: What should happen next? 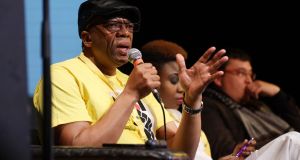 Lucky Khambule of Movement of Asylum Seekers in Ireland, which is in favour of abolition. Photograph: Alan Betson

In March 2000 then minister for justice John O’Donoghue announced a new system of direct provision providing asylum seekers with accommodation, food and a weekly allowance while their applications were being processed.

The ideal way to support asylum seekers was through “permanently built accommodation”, which would be constructed as quickly as possible and house 4,000 people, said O’Donoghue. Hotels would also be used to accommodate refugee applications “on a short-term basis” of not more than six months, he said.

Two decades on just seven of the 39 direct provision centres in Ireland are State-run. The remaining 32 are privately owned businesses.

Last month Tánaiste and Minister for Foreign Affairs Simon Coveney said people who were calling for an end to direct provision were “not living in the real world” and that the system was “significantly better in terms of standards than many other countries”.

Writing in The Irish Times earlier this month, former minister for justice Michael McDowell similarly argued there was “no workable alternative to some form of direct provision for asylum seekers”.

“In a period of acute domestic housing shortage and sky-high rents, the State cannot simply provide family homes directly or through rent subsidies for everyone who applies to be recognised as a refugee.”

Nonetheless, calls for reform continue. With 7,514 people currently in the accommodation system, including 1,531 in emergency centres, and the Government struggling to find suitable housing, the future of direct provision has never been more under the spotlight.

The Movement of Asylum Seekers in Ireland (Masi), which has repeatedly called for direct provision to be abolished, recommends asylum seekers spend a maximum of 90 days in reception centres in or near major cities and towns before moving into community housing through local authority support.

“When we say ‘End direct provision’ we mean fix the process,” says Lucky Khambule of Masi. “Let the process be for the people and give them the right to work as soon as they come here. You don’t just shut one system and go to another. You make those systems to run concurrently. Get the people to live in communities that are willing to take people.”

According to Minister of State for Immigration David Stanton,the current system is “unrecognisable” from what existed in the past.

“We now have self-catering accommodation and are heading for own-door accommodation. If you go to Mosney you’ll find each of these little chalets . . . it’s like a village. That’s what we’re aiming for.”

However, he does not believe direct provision should be scrapped. “I want to get away from the emergency hotel and bed-and-breakfast set-up . . . but the alternative [to direct provision] is that people would get sleeping bags and tents and [be] told to look after yourself. I don’t want to go that way.”

Former minister for justice Frances Fitzgerald said people were too quick to judge the asylum system, particularly given improvements over recent years. Centres previously flagged as unsuitable have closed down, and changes in legislation mean people are spending far less time waiting for an answer on their applications, she said.

“I don’t think people should speak simplistically about this as if it’s easy to find accommodation for asylum seekers. We’ve tried to improve things with timely decisions and a more transparent system. Ideally we would have smaller centres. I think when you hear ‘abolish direct provision’ people are speaking about the large centres where people have lived for years.”

However, Dr Liam Thornton of UCD’s school of law, one of the foremost experts on direct provision, believes the system has barely changed in 20 years. “We haven’t moved away from where we were when direct provision was established on April 10th, 2000.

“Once you start getting beyond six, nine months you cannot justify maintaining people in that system of kind of institutionalised living,” says Thornton. “It’s like debating, you know, would it have been nice if the Magdalene laundries had washing machines rather than the women being forced to scrub?”

Former High Court judge Bryan MacMahon, who chaired the 2015 working group report on direct provision reform, says the only solution to the reliance on emergency accommodation is to build more centres on State-owned land.

“If Peter McVerry can’t find a solution to housing, I can’t see any other solution. The big picture is: am I in favour of direct provision? No. If we were starting from the beginning, it probably wasn’t the best thing.”