No workable alternative to some form of direct provision

Delay in deciding cases and implementing decisions is massive and indefensible 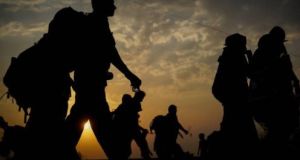 “Programme refugees from the Syrian conflict are human beings; so too are would-be economic migrants from Georgia and Albania. But that does not mean that they must be treated by Ireland in the same way.” File photograph: Getty

There is a world of difference between economic migration and asylum-seeking under national and international law. Ireland, as a member state of the EU, has certain obligations to permit EU citizens to migrate to Ireland to pursue economic activity in the State. We have entirely different and separate obligations under EU law, international law and domestic law in respect of those who seek international protection from state persecution.

The horrific death by asphyxiation of Vietnamese migrants in a sealed refrigerated container which people smugglers were cruelly using to traffic them into the UK has rightly evoked a rictus of revulsion and pity, especially here, in view of the suspected Irish connection.

The coincidence of that awful event with protest in some rural communities related to the possible opening of direct provision centres raises questions about Irish attitudes, values and social morality in relation to immigration generally.

That combination of news stories has also evoked some degree of virtue-signalling among certain commentators, many of whom chose not to draw much distinction or to blur any distinction between asylum-seeking on the one hand and purely economic migration on the other.

We have a common travel area with the UK which has existed since independence, and we and the UK accord each other’s nationals full right of migration, economic establishment and even the right to participate in parliamentary elections.

The common travel area will undoubtedly require us in a post-Brexit era to ensure that Ireland does not become an uncontrolled means of access to the island of Britain. It is naive to think that Ireland’s open land border, immigration laws and border controls can exist without regard to their implications for the UK.

It may not be fashionable to draw much distinction these days between genuine asylum-seeking as a protection against state persecution and economic migrancy to escape poverty.

The historical fact of Irish famine-era and later emigration to America, Britain and commonwealth states is deeply ingrained in our collective memory and values. We even refer to our illegal migrants in the US by the euphemistic term “undocumented”.

Neither xenophobic nor racist

But it is simply neither xenophobic nor racist to have legal barriers on inward economic migration, nor to enforce them. To fail to do so would be chaotic and unlawful. Where migration masquerades as asylum-seeking, we must have laws, systems, controls and enforcement measures to counter such abuse effectively.

We are bound to give asylum protection, including the full right to work and live normal lives, the same entitlements to social welfare, housing, education and health as are enjoyed by Irish citizens, to genuine refugees; we are not bound to afford those rights to persons who come to our State posing as refugees from state persecution when in reality they are economic migrants. It is utterly unsustainable, socially and financially, to treat all would-be economic migrants as though they were refugees. Worse still, to do so would inevitably tend towards racist unrest and disorder.

Take direct provision for asylum applicants as an example. In a period of acute domestic housing shortage and sky-high rents, the State cannot simply provide family homes directly or through rent subsidies for everyone who applies to be recognised as a refugee. Ireland is not alone in this matter. The UK also has huge problems accommodating asylum applicants in temporary housing provided by Home Office contractors.

Nor can the State pay social welfare payments at domestic levels to everyone who claims to be a refugee. The same applies to work permits. A simple claim to be a refugee cannot put every migrant on the same footing as a recognised refugee.

If it were legally possible to work in Ireland simply by coming here and applying for asylum, our entire system of immigration controls and employment permit regulation would collapse.

There is no workable alternative to some form of direct provision for asylum seekers.

Where the State has failed is in relation to processing applications for asylum status. There has been massive delay in establishing a system that decides on such applications. The International Protection Act 2015 took almost a decade to be enacted.

Coupled with under-resourcing of the decision-making process and accumulated backlogs in the courts’ judicial review list, the delay in deciding cases and implementing decisions on such cases has become massive and indefensible.

Many people spend years in direct provision as a result. The Supreme Court invalidated permanent legal prohibition on work permits for unresolved asylum applicants. But the greatest problems of unfairness stem directly from the length of the process itself.

Virtue-signalling is no answer to the very real issues which arise from conflating economic migrancy and asylum-seeking.

Programme refugees from the Syrian conflict are human beings; so too are would-be economic migrants from Georgia and Albania. But that does not mean that they must be treated by Ireland in the same way.

And it is wrong-headed to condemn the Taoiseach for pointing out the difference.

1 Luke ‘Ming’ Flanagan bares his bottom half to European Parliament
2 Normal People: Full-frontal nudity was not its most radical feature
3 The subtle signs that point the way towards haemochromatosis
4 Michael McDowell: Black Americans fear the future and so should we
5 Gardaí investigate Dublin Black Lives Matter protest over Covid-19 rule breach
Real news has value SUBSCRIBE